Shirin's portfolio - learn about her experiences and influences

Shirin Askari sewed her first dress at the tender age of 7. Seventeen years later she's putting the skills she began learning so young to the test on the megahit reality show, Project Runway.

Askari honed her skills at UNT, earning a bachelor of fine arts degree in fashion design in May, 2008. Later that summer, after scrapping plans for a trip to Europe due to a knee injury, Askari found out about Project Runway's selection process. With only 3 days until the application deadline, she put together an audition video and submitted it along with her designs for consideration. She sailed through the interview process and got the call to join the cast for the show's 6th season at its new home on Lifetime.

The season premiere airs Aug. 20, and with the show's taping finished, Askari talked in a phone interview about her experience with reality TV, her UNT education and her love of fashion.

What would viewers be surprised to know about the show, something behind the scenes you wouldn't realize from watching?
I was always curious about the fact that you never saw the participants eating. It was nice to find out that, yes, you do get to eat. And the other thing is the pressure. Yes the viewers see how that is affecting you, but they can't see, for example, that when you're sewing there is a camera 2 inches from your hands. It was hard to get used to the pressure of the competition AND get used to having cameras and equipment ALWAYS there.

What kind of advice did Tim Gunn give you? Is he as helpful as he seems?
Oh yeah. He was very encouraging. He always said, "just make it work." He really had a way of making you feel like you really could do it. 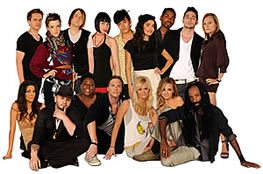 Did you get along with the other contestants?
For the most part. You'll just have to wait and see. There's always drama. You put that many people in that kind of setting, there's going to be drama.

How did you deal with the judges' critiques?
I think I did pretty well with them. UNT helped a lot with that because we had critiques with our garments. With anything art related you have to be able to take a critique, use it and learn from it. And I definitely learned that when I was at North Texas and that helped me a lot on the show. Anything you make that is art related won't be loved by everyone. People who are doing this who can't take critiques are in the wrong business.

How do you think your Project Runway experience will help you in the future?
It's definitely made me a stronger person. It's one of those experiences that not many people are going to have so the fact that I went through it I think will give me a leg up. It was just a great experience and I loved it -- it was amazing.

About her UNT experiences 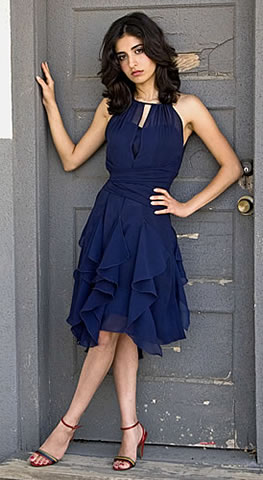 How did things you learned at UNT prepare you?
Draping with Anny Chang and Janie Stidham definitely helped. When you're working in that kind of competitive environment like on the show, you have to learn to be quick. And that has always been one of my strong points, being able to work very quickly. I learned a lot from all of my teachers at North Texas and I definitely recommend it to anyone who wants to get into a fashion design program. Anny and Janie, Marian O'Rourke-Kaplan and Myra Walker really taught me so much.

Did you have access to UNT's Texas Fashion Collection? How did it help you with your designs?
Yes we did have access, we could go and look at it and everything. Being able to look at a collection like the Texas Fashion Collection is something few students at other schools get to do. We were able not only to look at the designs but also look at how they are made. I think sometimes the quality of the design gets overlooked but it's important to be able to see the quality of some of these garments.  Some of the older ones [in the collection] are completely hand sewn. I think it's amazing that there is so much work that was put into them. I respect that -- a garment that not only looks good but is well made. It's such a huge and amazing collection. I definitely see that as an added benefit of studying at UNT.

What advice do you have for UNT students studying fashion now?
Not only know what you want to do but don't get discouraged. Working really hard is very important. I think some people say they want to be a fashion designer but they aren't willing to put in the immense amount of time and hours that it takes to do it well. During my last semester I was pulling about 3 all-nighters a week. Just keep working at it. All the hard work will hopefully eventually pay off.

What is your favorite memory about Denton and UNT?
Oh, there are so many! My friends and I would go to Hailey's every Thursday night for 80s night. We loved to get dressed up and go dancing. But that only happened when we weren't pulling all-nighters. My friends and I always got together when we had all-nighters. And we would sew, and keep each other awake. Just being around your friends makes it easier and it doesn't feel so much like you're working. Honestly, those all-nighters are probably my favorite memories.

Fashion on Main and Artwear in UNT's Avant-Garde newsletter (pdf)

What is your favorite wardrobe staple?
I always have a boat-neck knee-length black dress. It has a higher neck and higher front, and it's so simple and so chic I can wear it anywhere. I think every woman needs a chic, black dress that flatters her figure. Definitely.

If you had only a few minutes to throw together an outfit of random things in your closet, what would it include?
I would probably throw on:

It's more casual, but the high, black boots dress it up a little bit.  I'm not too crazy -- I'm not going to wear arm floaties and a tutu or anything. I'm not that kind of designer. I like to wear my own stuff, to create things that I would wear, things that people can actually wear in their everyday lives and feel confident.

Who or what is your greatest fashion influence?
It's hard to narrow it down to one person or thing. I love old movies, the 1940s and the 1950s. But a lot of designers say that. It's about how you interpret it and make it modern and make it your own that's really important. There are a lot of different designers that I really love. I don't take one designer and love everything that they've ever done. Even those designers like to experiment. I take inspiration from different places. I'm not all about one designer or one thing. I also love going to galleries and taking inspiration from sculptures and architecture and things that are not necessarily other fashion.