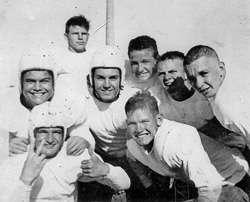 The KERA-TV documentary series Nowhere But Texas 2, co-produced by radio/television/film alumna Therese Powell ('91 M.A.), received top honors from the national Gracie Awards this summer. The segment “High Hopes,” about the Women Airforce Service Pilots training in Sweetwater during World War II, won for outstanding achievement in the “portrait/biography” and “outstanding special” categories and garnered an award for its director. The awards are presented annually by American Women in Radio and Television.

The documentary from the Dallas-Fort Worth public television station, which uses interviews and archival footage to tell interesting stories from Texas communities, has another UNT connection. The segment “Mighty Mites” features the underdog high school football team of the Masonic Home and School in Fort Worth, which tied Corsicana in the 1932 state championship game under the direction of coach Rusty Russell.