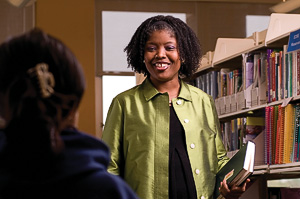 Reaching out a helping hand is second nature to Constance Lacy (’98), who is a prime example of what a person can achieve with motivation and hard work. Lacy became the first UNT student to receive a Harry S. Truman Scholarship, earned her doctorate and is now the division director for education and human services at UNT Dallas.

But she first attended UNT only briefly.

Lacy worked at the Dallas Can! Academy, an alternative school for “at risk” students, for eight years and coordinated a program for single mothers returning to school as role models for their children. One of her supervisors pointed out her aptitude for social work.

“When I realized UNT had a social work program and I had been a student there, I chose to return and just didn’t stop,” she says.

First earning an associate’s degree from Eastfield College, she returned to UNT in 1996 and became a Ronald E. McNair Scholar. The program encourages first-generation college students to pursue doctoral studies.

Lacy says James Duban, director of the UNT Office for Nationally Competitive Scholarships, told her about the Truman scholarship.

“We worked together for a year to get me prepared to submit my application,” she says.

Lacy went on to earn her master’s and doctorate at the University of Texas at Arlington. Her tenacity in pursuing her education rubbed off on her eldest daughter, Keilah Jacques (’06), a fellow social work alumna and McNair Scholar who earned her master’s and has been studying at Oxford on a Rotary Scholarship.

“It is probably the biggest compliment to see your children take what you’ve done and use it as a platform to do more,” Lacy says.