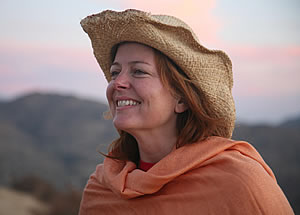 The effects of an undiagnosed thyroid disease left the 17-year-old with a goiter, protruding eyes, a 30-pound weight gain and some painful high school memories.

Today, a now healthy Buchanan is a noted documentary producer, writer and director whose resume includes VH-1’s award-winning Behind the Music series. She shares her story of overcoming adversity and collected the stories of other successful women in her first book, Note to Self: 30 Women on Hardship, Humiliation, Heartbreak and Overcoming It All (Simon Spotlight Entertainment).

“My focus is on women and helping them feel empowered,” she says. “I think people relate to these stories.”

Among the contributors are singer Sheryl Crow and actresses Mariska Hargitay, Camryn Manheim and Kathy Najimy. Thirteen-year-old Maisie McInerney, daughter of writer Jay McInerney, writes of an illness she overcame. And Dallas’ Sue Sandford tells how taking in a family of Katrina survivors changed her life.

After graduating from UNT, Buchanan packed her car and drove to California where an older sister lived. Soon, her career took off.

In addition to her work with VH-1, she has written and co-directed a short film with actress Jennifer Aniston, followed Crow on tour, flown over volcanoes and tracked grizzly bears.

Also high on her list of memorable experiences was the day this spring she returned to her high school to share her message of empowerment.

“The students really listened to what I had to say and were even asking for my autograph,” she says.

“It was a full-circle moment.”