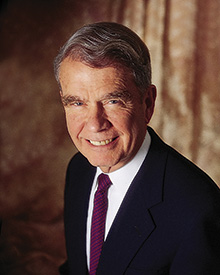 The UNT community mourned the loss of Alfred F. Hurley, UNT System Chancellor Emeritus and UNT President Emeritus, who died June 8, 2013, at 84. Credited with the rise of both the UNT System and UNT, Hurley was the system's first full-time chancellor and for 18 years was UNT's 12th president, the longest-serving president to date.

Hurley's tenure spanned 22 years, from 1980 to 2002. A retired brigadier general with the U.S. Air Force, Hurley joined UNT in 1980 as vice president for administrative affairs. He became UNT president and chancellor of the informal UNT System in 1982 and the system's first full-time chancellor in 2000 when the chancellor and president offices were separated.

Growth was the hallmark of Hurley's tenure. The UNT System rose to educational leadership in the North Texas region and became a formal system, one of the state's six higher education systems, while UNT substantially grew in size, prominence and impact. He also helped transform UNT into a public research university focused on becoming a top-tier public research university, and UNT experienced significant growth in construction, research funding and fundraising.

A champion for UNT and the UNT System

Hurley advocated for the state to designate UNT as one of its emerging research universities. He also elevated UNT's academic standing through programs such as the Texas Academy of Mathematics and Science, a residential, research-oriented program for gifted high school students to attend college while finishing high school. And he established the Office of Postgraduate Fellowships in 1993 — now the Office for Nationally Competitive Scholarships — to help students earn distinguished scholarships, fellowships, and research and study opportunities.

As chancellor, Hurley oversaw milestones for each campus. The Texas College of Osteopathic Medicine became the UNT Health Science Center at Fort Worth in 1993. The UNT System Center at Dallas opened in 2000 — the first step in establishing UNT Dallas, the city of Dallas' first public university.

"Al Hurley created the foundation for what the UNT System is today — a system committed to providing a high-quality college education to a diverse population and focused on advancing the knowledge and economic and social welfare of the North Texas region," Chancellor Lee F. Jackson says. "He was a thoughtful and highly respected leader, on and off campus, and a person of high integrity who elevated our stature throughout his long, distinguished tenure."

In a September 2000 editorial, The Dallas Morning News spotlighted Hurley as an "unsung hero of higher education."

"While other universities in this area have struggled at times to establish their roles, the University of North Texas has charged full speed ahead," the editorial said. "His willingness to take risks to expand the higher education choices for everyone will serve as his strongest legacy."

Hurley, a Brooklyn, N.Y., native from a working-class background, also had a distinguished military career. After graduating summa cum laude from St. John's University in Brooklyn, Hurley enlisted at the outbreak of the Korean War and went on to become an educator and administrator at the Air Force Academy. President Lyndon B. Johnson appointed him as permanent professor in 1966 and he served as head of the history department, chair of humanities and executive board member. His military decorations included the Air Force Commendation Medal with oak leaf cluster, Legion of Merit with oak leaf cluster, Republic of Vietnam Gallantry Cross with Device, and Vietnam Service Medal with two bronze stars.

Hurley earned his M.A. and Ph.D. in history at Princeton University under Air Force sponsorship and received Guggenheim and Smithsonian fellowships. He remained an active history educator and military historian — best known for the book Billy Mitchell: Crusader for Air Power. At UNT, he also was a history professor, and he taught more courses upon retirement. He and his wife, Johanna, played a key role in organizing UNT's annual military history seminar, which was endowed and named in their honor in 2006.

Hurley was a modest man who shared the credit for his leadership success with Johanna and many others. He noted at his retirement ceremony that his long stay and success could be attributed to many people who gave their best.

To mark the Hurleys' dedication and service, UNT renamed its administration building the Alfred F. and Johanna H. Hurley Administration Building in 2002.

President V. Lane Rawlins says UNT wouldn't be where it is today without Hurley demanding excellence.

"President Hurley's impact on UNT stems from his belief that UNT has all of the makings of a top-tier public research university," Rawlins says. "He championed our growth in quality, quantity, stature and impact — and those are still the same factors driving our progress today."

Read excerpts from some of the comments we received online after Hurley's passing.