Editor's note: Below are excerpts from some of the comments we received online after the passing of UNT System Chancellor Emeritus and UNT President Emeritus Alfred F. Hurley June 8. See more about his legacy and a campus service celebrating his life Sept. 28. 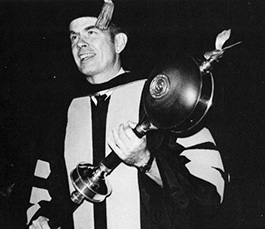 I will miss the presence that Dr./Brig. Gen. Hurley had on campus during my enrollment.

He was there when I graduated in the spring of 1990 and also was at my Air Force commissioning ceremony. My parents got to meet him and his wife and they were gracious as always.

Goodbye, sir, and I salute you one last time.

As an undergrad and grad student at North Texas in the '80s, I remember Dr. Hurley as a kind, energetic gentleman who tirelessly led the university to its greatness. As a foreigner, I believe all the contributions by a great man like Dr. Hurley are what made America a great country.

Dr. Hurley was a teacher and scholar who was ever present during my time at UNT. As a history major, I had the chance to interact with him on a fairly regular basis and truly enjoyed his company. His military history seminar is an event I look forward to attending every year.

But most of all, Dr. Hurley was one of my professors who wrote me a letter of recommendation for graduate school. I will forever be indebted to him for that service. 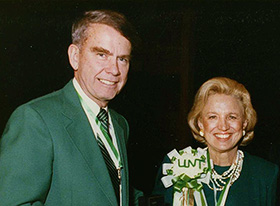 I was a student leader at UNT during the Centennial year and have many fond memories of Dr. Hurley and his wife, Johanna.

As I have found myself thinking back to that time, I have appreciated the grace with which he led, his love for his wife and the devotion they showed as leaders of UNT during a period of significant growth.

I had the honor of taking Dr. Hurley for a course titled "Command and Commanders" in the UNT history department in 2006. I had apprehensions about the class since it was a one-night-a-week, four-hour class.

From the first class to the last class, I felt as if Dr. Hurley was simply leading a conversation about his vast experience as a member of the military. He would just get up and talk for the entire four-hour class.

It was by far the best class I had at UNT and I am grateful I had the opportunity to experience a small piece of what Dr. Hurley gave back to UNT and the country he loved.

God be with you, Dr. Hurley.

As a political science doctoral student from Thailand who went to North Texas in 1981 and stayed until 1988, I had a lot of experience with the university, including Dr. Hurley. As the new president, he had promoted foreign students from all over the world to study at the university.

Around 1985, the Texas Legislature imposed budget cuts and asked all public universities in Texas to increase tuition sharply. Foreign students were among those affected most.

The Foreign Student Organization organized a protest and I, as one of the organizers, requested the university to help solve the problem as quickly as possible. After no action, the FSO issued the demand to see the president for discussion and promised to stay protesting at the lawn in front of Willis Library.

Dr. Hurley, who was so busy with the Legislature's immediate budget cuts, was kind enough to see our problem. He asked the FSO to hold the meeting at his office and discussed the plan to help solve the problem in the short run. He promised to do his best to help us stay enrolled.

It was my deep impression that Dr. Hurley never overlooked us when he saw our difficulties. The university kept the promise and most foreign students stayed rather than transferring to another university as threatened.

To us, Dr. Hurley was the kind of person who indeed knows people in need. We miss you, really miss you, Dr. Hurley.