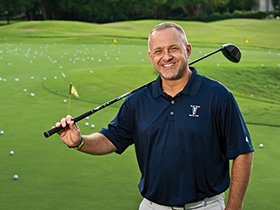 One of 13 selected from the U.S., Jason Leap ('10) will compete Sept. 23-25 in the second annual Simpson Cup, a Ryder Cup-styled golf tournament supporting injured service members and veterans from the U.S. and U.K.

The Keller resident will compete at the Royal Lytham and St. Annes Golf Club in the U.K., where the 2012 Open Championship was held. Proceeds benefit the On Course Foundation, which supports the recovery of those injured in service.

"Golf and the military are my two passions," Leap says. "When you combine the two, it's something I can get excited about not only for my own recovery, but to help the recovery of other people — to get them out of the house and use it as a rehabilitative tool."

After retiring from the U.S. Air Force, he came to UNT for its military-friendly reputation and earned bachelor's degrees with majors in criminal justice and sociology. Now Leap works full-time as a security manager for Weiser and serves as vice president for the North Texas Wounded Warriors Golf Association, using golf to help other veterans adjust to post-military life.

"My dream was to compete in a major golf tournament or one of the international events like the Ryder Cup," Leap says. "But to play golf for your country and to represent the U.S. as a former military member — that exceeds those expectations I had 22 years ago." Given Kachepa ('09) was a victim of labor trafficking, until he found a new future with a UNT alum.
Top