Read a feature about alumni reflecting on JFK's assassination 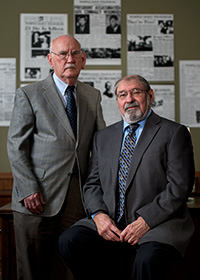 Covering the JFK assassination in Dallas for three UNT alumni was just one of many major events they covered in their long journalism careers.

In fact, Mike Cochran ('58), Peggy Simpson ('60) and Keith Shelton ('72 M.J.) were all inducted into the C.E. "Pop" Shuford Hall of Honor for outstanding journalism alumni.

But that career almost never happened for Mike Cochran, who considered public relations.

A few weeks before graduation, he received a public relations job offer from an Ohio oil company for $150 a week. But C.E. "Pop" Shuford — the legendary journalism professor who started the program at UNT in 1945 — told Cochran he had got him a job at the Denton Record-Chronicle for $60 a week.

"One of these days you'll thank me," Shuford told him.

"And I have, several times," Cochran says.

Cochran has had quite a career. After he worked for the Record-Chronicle and the Abilene Reporter-News, he landed the job at the Associated Press. Cochran, who covered sports for The Campus Chat, originally wanted to be the Texas sports editor for AP.

"But the assassination changed all that," he says. "I fell in love with news."

Cochran covered the rampage of Charles Whitman, the University of Texas at Austin sniper, and the trials of Jack Ruby, Oswald's killer, and Cullen Davis, the Fort Worth oil tycoon who was acquitted of murdering his wife's boyfriend and young daughter. He wrote about many of the space missions, including the Apollo moon landings, and sporting events, such as the Colonial golf tournament and the Cotton Bowl.

He later served as a roving Texas correspondent for the AP, writing many offbeat features. Before he retired, he worked for the Fort Worth Star-Telegram. He wrote several books, the most recent Claytie: The Roller-Coaster Life of a Texas Wildcatter. about former Texas gubernatorial candidate Clayton Williams, and The Godfather of Poker, about Texas-born Las Vegas gambler Doyle Brunson. 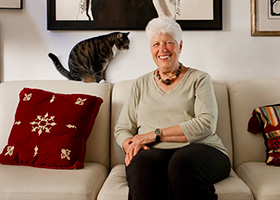 His former colleague, Peggy Simpson, also honed her skills in journalism during her years at North Texas. During her first week on campus, she received a flier for a sophomore reporting course.

"After the first week I was hooked on it," she says.

But after graduation, she had a tough time finding a job. She didn't want to write about fashion and society — the beats that women were hired for at the time. She got an assignment covering a murder trial for a weekly newspaper in Hondo, which led her to the job with the Associated Press in Dallas.

She went on to cover Congress for the AP, reporting on the Southwest regional beat, then on such national beats as banking and labor law reform. She also started a beat on the women’s political movement and the congressional passage of laws implementing the 1964 civil rights law.

After a Nieman fellowship at Harvard, she became a national political reporter at the Boston Herald and later covered national economic issues for Hearst Newspapers. She opened a Washington bureau for Ms. magazine. From 1991 to 2002, she worked as a freelance reporter in Eastern Europe as onetime Soviet satellites had to find their economic and political footing in a post-Soviet world.

She now works as a freelance writer in Washington, D.C., and has just completed a three-year term as president of the Dupont Circle Village, a leading entity in the national aging-in-place movement.

Keith Shelton  made his mark at UNT as a teacher.

He worked for the Dallas Times Herald from 1959 to 1965, and then served as editor for the Denton Record-Chronicle. Shuford, the journalism professor, persuaded him to teach a class and Shelton taught a lab for reporting of public affairs and earned his master's degree at the same time.

His students included the late Howard Swindle ('68), who led The Dallas Morning News to three Pulitzer Prizes; Morning News columnist Steve Blow ('74); and WFAA anchor Cynthia Izaguirre ('97). He often hears from his former students, and four of them recently took him out to lunch.

"Obviously, I enjoyed the students most," he says. "And I miss them since I retired. All the other stuff comes in second."