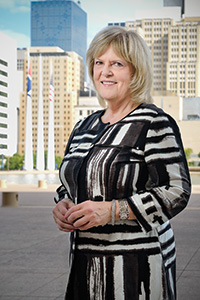 Two degrees from UNT gave the recently retired Dallas city manager a strong foundation to transform one of the nation's largest cities into one of its most vibrant.

Outside of Mary Suhm's Dallas City Hall office, there is more than the cityscape of Dallas. There is her life's work.

To the right is the Dallas Public Library's downtown branch, where she worked as a librarian at the start of her city government career after earning the first of two master's degrees from UNT.

To the left is the Omni Dallas Hotel and Convention Center covered in LED lights, and in the distance, the sinewy Margaret Hunt Hill Bridge, which connects west and downtown Dallas. Both are symbols of the new, edgy Dallas that Suhm ('74 M.S., '84 M.B.A.) helped shape in her eight years as city manager and 35 years working for the city of Dallas. Both are projects that Suhm helped broker as one of Dallas' most powerful city officials.

Suhm played an integral role in breathing fresh life into one of the nation's largest and most economically powerful cities while keeping Dallas focused on sound fiscal management and steering it safely through the national economic downturn. As city manager, she was responsible for the city's daily operations, managing a staff of about 13,000 employees and an annual budget of nearly $3 billion.

"It's been exciting to work on things that change the face of the city and change how people feel about the city," says Suhm, who announced her retirement this summer.

Get to know
Mary Suhm

Read a Q&A with Mary Suhm

Suhm's UNT degrees came at pivotal points in her career. Earning a master's in library science helped her move from teaching to working in libraries, and an M.B.A. helped her make the leap from library management to city management. She says both programs were strong and challenging — giving her knowledge, skills and broad experience. Those qualities, with UNT's accessibility and value, made it possible for a single mom working full time to further her studies and her career.

"UNT offers people in the metroplex access — both geographically and financially — to good, quality education," says Suhm, who was honored in 2008 as a Distinguished Alumna of UNT and in 2013 at UNT's Emerald Eagle Honors event for her continued accomplishments. "It opens doors for people."

At Mayor Mike Rawlings' request, Suhm is staying on with the city through January 2014 to help complete the budget and other projects.

She started as a school teacher in Carrollton and worked at a library in Allen before moving to the Dallas Public Library System in 1978 and getting her first taste of management. She returned to UNT to earn her M.B.A. and by January 1985, Suhm was working as assistant to then-mayor Starke Taylor.

She moved through the ranks serving as municipal court administrator, as top civilian administrator in the police department and the first woman in that role, as assistant city manager and first assistant city manager. Suhm persevered to become the city's top appointed official and the second female city manager in its history. She's worked with eight mayors, numerous city council members and thousands of employees — whom she considers partners in making Dallas "the city that works," as its slogan says.

"I like the way Dallas is going, but no single person can take credit for that," Suhm says. "It's just a good time to be in the city."