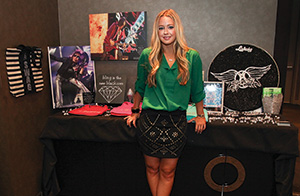 Many small business owners frame their first dollar as a reminder of how they started. But Caitlin McConnell's ('10) memento of the business she started while a senior at UNT is a photo of Aerosmith lead singer Steven Tyler wearing a T-shirt she made donned with crystals.

McConnell's business, Bling is the New Black, started as a way to help her mother, Tanya Griffin. Griffin's employer wanted just a few shirts with the business logo and Griffin thought McConnell, an interdisciplinary art and design studies major, could help.

McConnell completed the order, designing the logo in crystals, and an idea for a business was hatched. Some of the first potential clients to come to mind were the members of Aerosmith. McConnell, 26, met the group through a family friend when she was 14.

"Within the first year, we had Steven wearing one of our shirts on tour," McConnell says. "Almost two years ago, I designed a guitar for Joe Perry, the lead guitarist. I was sitting on my bed making it for three months, one crystal at a time. He's been using it on tour ever since."

After completing Perry's guitar, the group extended a special invitation to McConnell. "I toured with them about three and a half weeks throughout the U.S. and Canada," she says.

Then the guitar company she worked with to "bling" Perry's guitar commissioned her to do a guitar for former Guns N' Roses member Slash and Nashville Star finalist and country singer Miranda Lambert. Through her celebrity connections, she's also created items for Ringo Starr and some of the Real Housewives reality stars.

However, local businesses and groups remain her "bread and butter," she says, and giving to charities remains a high priority. Beyond T-shirts, she creates merchandise from cell phone covers to shoes with charity logos and slogans often giving a portion of the sales back to organizations such as area high school booster clubs and pet rescue groups. But, one charity remains dear to her heart.

"Autism Speaks is my main cause because my brother is autistic," says McConnell. "That has always been a huge part of my life. The T-shirts and merchandise we sell bring awareness and help the group raise money. That's a huge part of our business."

McConnell credits her education at UNT for helping her grow her business. Originally a fashion design major, she opted for an  interdisciplinary art and design studies degree because it allowed her to take more drawing, painting and other types of art classes. College of Visual Arts and Design academic counselor Susanne Coffey ('00 M.S.) suggested the degree because of its course work flexibility. Developed by Kelly Donahue-Wallace, associate professor of art history, the interdisciplinary art and design studies program graduated its first students in fall 2008.

"It allowed her to combine a variety of her interests into one degree," says Coffey, who has kept in touch with McConnell. "Supporting students and seeing them learn how to parlay their undergraduate experiences in visual arts into something exciting and rewarding is what I love best about what I do."

McConnell's drawing skills allow her to create and perfect designs for the apparel, and the fibers classes taught her how fabric will wear, which helps her pick out the best materials for her merchandise.

"I got to take my favorite courses," McConnell says, "and now I use them in my business."

On living in Dallas: I lived in New York, but it wasn't for me. I like L.A., but I couldn't live there. I'm good here — based in the middle of the country so I can easily fly out to take care of business.

On the weirdest thing she's ever "blinged": We've started blinging KitchenAid mixers. They're huge and they take forever because I have to place one crystal at a time. We also had someone give us a Sonicare toothbrush to bling.

On working with crystals: All of our stones are real crystal or Swarovskis. We use a machine for some shirts. The machine is like a printer and can place two colors of stones at a time. For handmade items, I used to use a tweezer, but now I have a trick that I use — it's a secret!