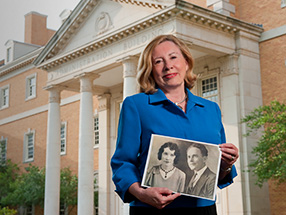 Growing up, I used to come to UNT's campus all the time.

My father, Ulys G. Knight ('25), was best friends with then-president J.C. Matthews ('25). They were education students together at North Texas. My father had great memories of his time here, starting as a freshman in 1921. He was on the basketball team that won the Texas Intercollegiate Athletic Association championship and was active in baseball, too, earning numerous good-natured nicknames such as "Mr. North Texas."

My mother, Vera McCurdy, who was younger than my father and attended nearly 10 years after he did, was valedictorian of her high school in Bridgeport. In that day, there was not any funding set aside for valedictorian scholarships. The grocer, the banker, even the undertaker, reached into their pockets and produced money for her to go to school. She felt that she was representing her entire community while she was at North Texas, so she made the most of her time.

She studied commercial bookkeeping and became a member of the original Green Jackets service club, and she had fond memories of the family-style boarding house where she lived. She would have graduated in 1934, but she overheard her father say how hard the Great Depression had hit their family, so she moved back home, married my father and worked to help make money. But she continued to keep in touch with the other girls in the boarding house.

Throughout their lives, my parents so benefited from the academic impact that North Texas had on them. They also never forgot the kindness of people like Miss Beulah Harriss, who worked in the physical education department, was an advisor for the Green Jackets and treated all of the students as her children since she had none of her own.

My father primarily worked as a school district superintendent. And when my parents moved to Wichita Falls, they started a North Texas alumni group that at its peak had about 200 members.

President Matthews was very appreciative -- as were others -- of all the work my parents did to form that group, and also another alumni group later on. Two years after my father's death in 1973, the Ulys G. Knight Spirit Award was started to honor those who made noteworthy efforts to sustain UNT's spirit.

The first time my mother went to the award ceremony, she was amazed by the number of people in attendance and how UNT had grown. In her later years, she would have me read her the latest issue of The North Texan when it came in the mail. We were always so impressed with UNT's diversity of majors and specializations. After every reading, she said that she wanted to help the university in any way she could.

Mother died two years ago and now we're carrying on her desire to help the university by transitioning the Spirit Award into a new award -- the Ulys and Vera Knight Faculty Mentor Award, which recognizes a faculty member who demonstrates sustained excellence in mentoring undergraduate students, graduate students and or other faculty. My parents saw North Texas in such a positive light. I know they would have wanted to encourage young professors to keep accomplishing more.

The first recipient of the Ulys and Vera Knight Faculty Mentor Award is Bertina Hildreth Combes, associate professor of educational psychology. She will be honored at UNT's Salute to Faculty Excellence event Sept. 27. For more information about the award, visit northtexan.unt.edu/mentor-award. When we posted a UNT Facebook request for couples who met on campus to send us their love stories for Valentine’s Day, we got some great responses.
Top