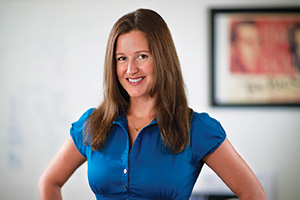 Gabriella Draney ('02) is living proof that successful people aren't afraid to take chances. As a co-founder and CEO of Tech Wildcatters, Draney helps connect Dallas technology startups to the resources they need to mobilize quickly and make it in the industry. Working with about 10 to 15 companies at a time, Tech Wildcatters — named as one of the Forbes Top 10 seed accelerators — invests $25,000 into tech startups, followed with a 12-week program, and makes connections with mentors, investors, customers and strategic partners.

"Wildcatting is a whole lot like startups. You don't know at first if your idea will catch fire, produce oil, so you're basically digging a bunch of holes and hoping one hits," she says. "But with more knowledge, people have a better idea of where to drill."

Draney transferred to UNT her sophomore year as a finance major. She says she loved the diversity and creativity of the university and was given many opportunities to learn and gain practical experience in her field.

"I appreciated that every single one of my professors had real-world experience," says Draney. "My banking professor was a bank president."

By accident she realized her passion for startups. Draney's friend asked her to help with the financials for a business planning competition at UNT and got the bug. She went on to help develop an aircraft scheduling software company, as well as a specialty foods retail store before co-founding Tech Wildcatters in 2010.

Draney's dedication to helping entrepreneurs get their ideas off the ground will expand this fall to helping startups with a focus on healthcare in the Dallas community.

"My favorite part is seeing people realize that the idea that was in their imagination can actually happen," says Draney. "It's pretty exciting." The owner of Houston's Gallery Furniture has made it his business to help those in need.
Top