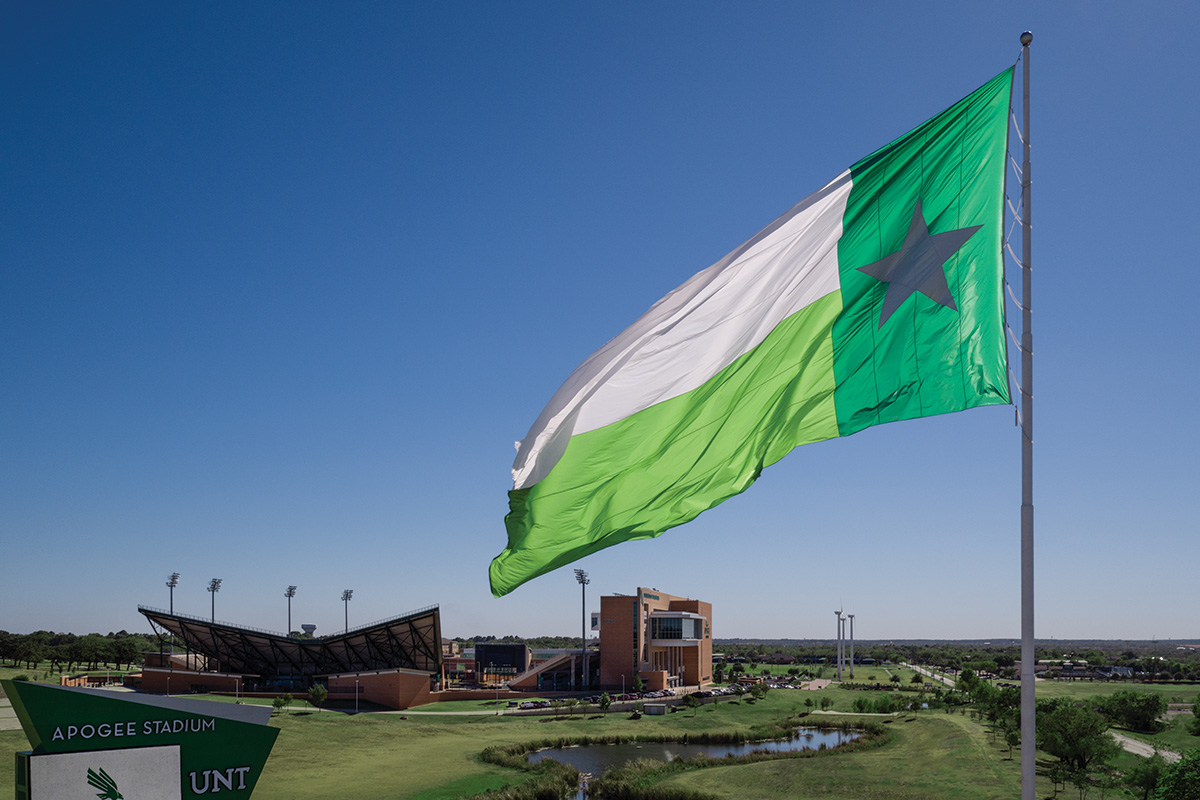 Travelers on I-35 near Denton can't help but notice they're in Mean Green country -- now that the largest-ever version of our UNT Battle Flag is flying outside Apogee Stadium. A university tradition for more than three decades, the 30- by 60-foot flag was raised in September on a 120-foot pole just north of the stadium. It beat out three other flag designs for the honor, garnering 61 percent of the first-place votes cast by fans online.

The UNT Battle Flag was created by Jim Hobdy ('69) while he was an employee of the UNT athletics department in 1986. As director of marketing, fundraising and promotions for athletics, he was looking for a design he could put on a podium for an alumni event at which Chancellor Alfred F. Hurley would be speaking.

"This was at one of the big hotels in Fort Worth, and Dr. Hurley had a portable podium with no university marks on it," says Hobdy, who earned his UNT degree in advertising design. "My first thought was to put the Texas flag on it, but then I thought, 'Well, he's not the governor. What about using the Texas flag in greens?'"

In place of the blue field on the Texas flag, Hobdy chose the shade of green used for the athletics teams. For the red field, he chose the "Hayden Fry-era green" of the 1970s, famously lime in color.

"The Texas flag is probably one of the few state flags immediately recognizable throughout the country," Hobdy says, "and this was my way to honor it."

The design immediately began to catch on.

"All of a sudden, we started getting calls from people who were at that event saying, 'Do you know where I can get one of those flags?'" Hobdy recalls. "None existed, so they had them custom-made to fly on flag poles at their homes."

Within a few years, the Talons spirit group began waving the flag at football games.

"They really get the credit for its acceptance," he says. "Once they started using it, it got to be more visible."

"I didn't think a whole lot about it until Facebook became popular and people began posting pictures of the flag. That's when you started seeing it travel," Hobdy says. "It went to Australia. Soldiers serving in Iraq and Afghanistan took the flag with them. It went everywhere."

Hobdy worked for the athletics department from 1984 to 1994, leaving as assistant athletic director for marketing promotions. He also served as the cheerleader sponsor from 1988 until 1994, the year the cheerleaders won a national championship.

He and his wife, Sylvia Klein Hobdy ('86 M.B.A.), still attend football and basketball games as season ticket holders. He says he has been a big UNT fan ever since his college days, thanks to his membership in Lambda Chi Alpha fraternity.

"They always stressed going to the games and kind of hooked me on 'Be true to your school,'" he says.

Did he ever think a spur-of-the-moment podium decoration would one day be flying proudly, 60 feet long, in the skies of Denton? Students celebrate one of the UNT community's favorite events.