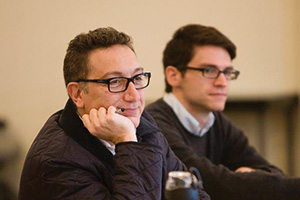 UNT students will have the opportunity to learn from a National Medal of Arts-winning playwright and a 10-time Emmy-winning composer this year. Moisés Kaufman, who wrote The Laramie Project, will serve as the 2017-18 artist-in-residence for UNT's Institute for the Advancement of the Arts. Bruce Broughton is the 2017-18 composer-in-residence for the College of Music.

Kaufman will work with students in the Department of Dance and Theatre to create a new work for the stage inspired by author Jorge Luis Borges, known for his surreal short stories.

"The best work happens collaboratively," says Kaufman, who will use techniques encouraging participants to engage with one another that he's used as co-founder of the Tectonic Theater Project.

Kaufman also wrote Gross Indecency: The Three Trials of Oscar Wilde and has directed plays with Jane Fonda and Robin Williams. He was awarded the National Medal of Arts in 2016.

Growing up in Venezuela, he found the theatre to be a solace to him as a young gay man.

"I still believe theatre has a power of communicating in a very visceral and humanistic way that I find potent," he says.

Broughton is best known for his many memorable and award-winning scores for films, including Silverado, Tombstone, The Rescuers Down Under, Miracle on 34th Street and Harry and the Hendersons, among others. JAG, Tiny Toon Adventures and The Orville all grace his television theme credits.

He is working with music and film students and conducting research as part of four one-week residencies throughout the school year.

"I am very impressed with the quality of instruction at UNT, the openness to fresh and contemporary ideas, and the passion that the faculty, dean and varied division and department heads demonstrate in working together to achieve the highest quality education," Broughton says. "I am grateful for the opportunity to be a part of this already substantial and highly successful arts program."