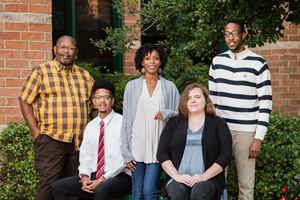 During the five-week course, she guided her students in an interactive community video project called Freedman Town 2.0. The project focused on Quakertown, the bustling community of black residents in Denton located at the site of the city's present-day Quakertown Park. The community was formed in the late 1800s and flourished until its removal by the city in the 1920s. Many early residents of Quakertown came from Freedman's Town, the first settlement of freed slaves in Denton.

"Quakertown happened, a lot of people know that story," says Carter-Bishop, "but that's not where it started and that wasn't where it ended. Our project highlights life before, during, and after the demise of Quakertown. Many of the residents we interviewed had stories of community activism and told us tales of how they stood together to get roads paved, build a community center and senior center, and to integrate the schools."

Students interviewed residents of Southeast Denton and created an interactive video tour highlighting the history surrounding the people of the community. Forced to leave Quakertown by 1923, many residents moved to Solomon Hill near where Freedman Town originated.

Freedman Town 2.0 can be found on the free augmented reality app, Aurasma. It functions similarly to Pokémon Go, by detecting the environment and overlaying an interactive video history from the user's device.

"It was exciting to be able to do that," says George Starks, an integrative studies major who was one of the students on the project. "Once you have it all laid out, anybody can walk through the story and shine the phone around the area. The app pops up with the history and it actually tells you about that section of time."

Carter-Bishop's class started the project, for the most part, with only a vague idea of the stories of this community, but after intense research and interviewing, they ended up knowing them very well.

"I live in Fort Worth and I had no clue, no idea about Quakertown," says Nathan Taylor, a media arts major. "So just doing the research and shedding a spotlight on stories was really a great experience."

Carter-Bishop says she was pleased with the outcome of the class project.

"The beauty of this project is that it brings people together in an interactive, connected way while learning about the rich history of Denton's black community," she says. "It also taught students the importance of preserving a community's history. This project gave residents a chance to tell their history, from their point of view, for generations to come." Alumna makes mark as first woman to lead the Geography and Map Division at the Library of Congress.
Top