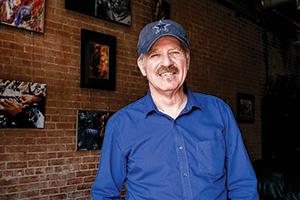 John Ford Coley first came to North Texas in 1967 as a law student. He left three years later, on the verge of being a rock star.

His rise as a musician began as a student, when he spent his Thursday nights playing organ in a band around the state with Dan Seals called Southwest F.O.B.

They moved to Los Angeles, changed their act's name to England Dan and John Ford Coley and became a top-selling Grammy-nominated American soft rock group that produced such hits as "I'd Really Love to See You Tonight."

Coley returned to Denton this summer, when his name was unveiled in a sidewalk paver on Hickory Street in the downtown Denton Arts Walk of Fame, which honors artists who have made their mark in the city. He also visited the downtown square and Denton Community Market.

"I have a truckload of wonderful memories associated with my time spent in Denton from the late '60s and very early '70s," he says. "It's very nice to be able to actually see places I remember that haven't been turned into strip malls like so many other places."

Back then, he admits to being a bit of a rebel, getting in arguments with his music teacher and playing practical jokes.

"One of my favorite plays was A Streetcar Named Desire. I lived in an apartment on Stella Street in Denton my sophomore year and having a bizarre sense of humor, I would sometimes park my car a block away from the apartment, quietly sneak in and do my best Marlon Brando impersonation screaming out, 'Stellllllllla,'" he says. "Then quickly and quietly I'd close the door and then hear doors open with people looking for me. Then much later I'd sneak out again, get my car and drive into my spot like I was just getting home, making an extra effort to slam the car door to make them think I had just arrived home. I never got caught."

He says he found the music program too traditional since he had been playing rock music with Seals, his childhood friend, in Dallas. Coley eventually majored in English literature and minored in theatre.

Southwest F.O.B. often played in Dallas, and once they performed at a dance on campus,  when Coley hoped that their gig would attract notice for him from a classmate that was there.

"I thought that if she saw me performing in the band she might consider me interesting and cool," Coley says. "But when I saw her the next day in class, it became quite clear that not only was she not impressed with me, she might have actually been less than impressed. So much for the prestige of being in the band."

Coley left North Texas in 1971. The duo signed with A&M records in 1972, but they scored their biggest hits, such as "Tonight," "Love Is the Answer," "Nights Are Forever Without You" and "We'll Never Have to Say Good-bye Again," in the late 1970s. Since the duo split up in 1980, Coley has worked on various projects, including writing a novel and touring as a solo act. He divides his time between Nashville and Charleston, S.C.

Coley and Seals' songs remain part of pop culture. The duo was portrayed in the recent HBO show Vinyl. And fans frequently come up to Coley to share memories about their songs. One couple asked him to play at their wedding. Another fan says he named a child after him.

"It's quite gratifying but at the same time difficult to describe how meaningful it is when someone appreciates what you've done or created," Coley says. "I still get moved but it's something that I try to not take for granted."

Learn more about the Denton Arts Walk of Fame and other honorees who are UNT alumni.