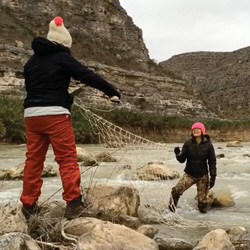 Analise Minjarez ('13) and Sarita Westrup ('12, '16 M.F.A.) knew they had a connection as students during a weaving course, when they were both working on pieces inspired by Mexican tradition.

Now they combine their love for the Texas-Mexico border and fibers with Tierra Firme -- an experiential research project that investigates the place and identity of artwork along the Texas-Mexico border. As part of the project, they've created art pieces that have been exhibited all around the state, including the Perot Museum in Dallas and Guadalupe Mountains National Park in West Texas.

"The frontera is a place of great value with people and landscapes that fuel the Tierra Firme creative collaboration," Minjarez says. "We feel that the borderland needs sustenance and support from the North Texas region and we translate stories of home with a visual vocabulary that can transport the viewer to borderlands."

Works as part of the project include the Bienvenidos Portal Portrait, an interactive installation in which people can dye cloth in an indigo vat and hang the cloth on a dry line that moves through an arch. The mass of blue on the cloth represents both a wall and the blue sky of the border region. Another piece is El Norte, which they created during a trip from Minjarez's hometown of El Paso to Westrup's hometown of McAllen. The suspended net and hanging crepe, dyed from avocado pits, hibiscus flowers and black beans, represents a border wall that is designed for viewers to walk through.

Their use of fibers began when they learned to sew from family members.

"I instantly felt a connection and a buzzing sensation when I would work with cloth," Westrup says. "Who knows why you have an affinity for an object or material, but I knew that I had to learn more about the process of making cloth."

Minjarez began as a communication design major, but realized she preferred the hands-on method of fibers to being on the computer.

"Fibers is the best way for me to be the most honest and connected to my border story," she says.