Get to know
Harry Joe 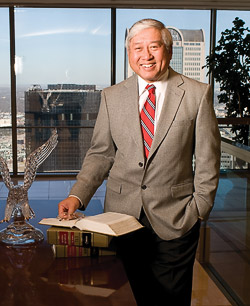 As the son of Chinese immigrants, he saw firsthand the power of a new beginning in America. And the ’60s civil rights battles left a deep impression.

Harry Joe (’70) is used to being the first. The first in his family to graduate from college. The first to go to law school. The first Chinese American licensed to practice law in the Dallas-Fort Worth area.
These milestones were forged by a childhood of standing out. Joe’s is the only Chinese family he can remember living in his Oak Cliff neighborhood in the 1950s. He was the only Chinese student in his high school graduating class and was among relatively few ethnic minority students in college and law school.
“In high school, I had an interest in the struggle of people, and law was the result of following that interest,” says Joe, who came of age as the civil rights movement railed against deep-rooted segregation.

The injustice of discrimination spurred him to take “History of the Old South” at UNT with Harland Hagler, now an associate professor of history.
Joe says Hagler’s lectures about the pervasiveness of slavery were thought-provoking, as were the struggles his fellow minorities were facing at the time.
“I was very conscious that a lot of things weren’t right,” Joe says. “The thought occurred to me if you’re that interested and you think there is an injustice, then do something about it.”
He did. Joe studied law at Washington University in St. Louis while his wife, Liz Royse Joe (’70), taught at a local school.

One of Joe’s law professors, David Becker, says the first thing he noticed about Joe was his intelligence.
“I could see within him not only an extraordinary intellect but a resourcefulness and resilience,” says Becker, now associate dean for external relations and Joseph H. Zumbalen Professor Emeritus of the Law of Property.
Neither Becker nor Joe knew then that the budding attorney would become an immigration lawyer. Joe started out in litigation and didn’t turn to immigration issues until the late 1970s when foreign college students started seeking his help to stay in the United States.

In a career-defining case, Joe won a precedent-setting appeal for an Iranian student seeking asylum. The student would have been arrested for protesting against the government if he returned home. The U.S. Court of Appeals reversed a Board of Immigration Appeals decision not to reconsider his deportation when new information came to light and essentially limited the board’s discretion.
Joe was later recognized for his immigration work by the National Law Journal, an early career highlight that gave way to numerous other distinctions, including being named in The Best Lawyers in America, a leading directory of top lawyers.

Building on the legacy

Joe’s work builds upon the success of his parents. He says his father came to the U.S., uneducated and unable to speak English, and toiled as a dishwasher and a cook for years before owning his own restaurant. Now, Joe’s parents own a building that houses a popular Dallas bar and restaurant.
And Joe, as a partner in the law firm Jackon Lewis LLP, helps others who want to pursue their own American Dream.

“Someone helped my parents, which enabled me to realize dreams I had,” he says. “I’m in a position to help make people’s dreams come true.”