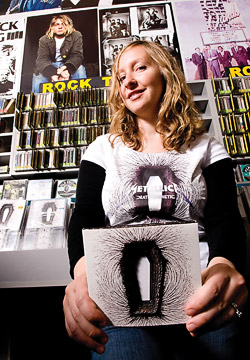 Hundreds of Death Magnetic Metallica CDs lined display cases at the Virgin Megastore she was visiting in downtown San Francisco. Death Magnetic posters hung above her. People waited in line with the CDs in their hands.
Not long after college, Charette designed the cover for the Metallica album — a white coffin surrounded by a field of magnetic dirt. It recently earned a Grammy for “best recording package,” which includes her design work. And Charette credits her education at UNT for landing her the job as a designer at Turner Duckworth, a San Francisco design agency with mega-brand clients.
“I get put on brands like Dolby and Coca Cola because they need continuous fresh thought,” Charette says. “And the way the classes at UNT were structured, they say, ‘I know you came up with 100 thumbnails, but I need you to come up with 100 more. I need more ideas.’ Going back to that well of creativity over and over and always finding something new — that is what has made me successful at what I do now.”

A passion for design

Professors in the communication design program in the College of Visual Arts and Design – which earned the Best School Award for the third time in five years from the Dallas Society of Visual Communications in April – push students to reach for more ideas, try harder and rise above the pack.  Ultimately, that hard work can help propel alumni through the ranks. Today, many of those alumni work on internationally visible campaigns such as Nike, Fossil and more.
“Here at UNT, we like to say ‘concept is king,’” says Eric Ligon, associate professor of communication design. “But it takes a student who is passionate about design to honor that maxim as a life-long pursuit. Designers who are willing to commit themselves passionately to the life-long pursuit of concept, invention and reinvention wield great power in the marketplace. It is that passion that keeps these alumni at the top of their fields, whether they are convincing us to ‘just do it’ or to just see it in a new way.”

Stephen Zhang (’94 M.F.A), vice president and image director of Fossil in Richardson, joined the company in 1994, the same year he earned his master’s degree from UNT. He manages a team of 35 designers — about half of which he says is made up of talent from the UNT communication design program. His job involves managing the Fossil image design department and collaborating with teammates on strategies for Fossil’s brand evolution. His team creates the Fossil image in packaging, points of sale, magazines, web site, advertising, retail stores and catalogs seen in more than 100 countries.
“UNT has provided a very valuable talent resource to Fossil design,” Zhang says. “Its stringent education prepares the students for the real world. When they enter the work force, they might take a sigh of relief and say, ‘This is no big deal.’”
Zhang came to UNT from the Luxun Academy of Fine Arts in China, where he earned a bachelor’s degree in graphic design and served as an assistant professor for four years.
“Because of the training at UNT, we are able to use the process to solve communication problems or answer the creative challenges that businesses face,” Zhang says. “In a company like ours, you have to have a clear understanding of business, creative and marketing objectives. Then, you’ll use your creative skills to help achieve those objectives.” 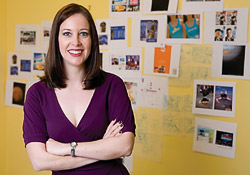 Amanda Sinele (’03) learned those lessons every Monday, Wednesday and Friday, bringing 100 new ideas to classes at UNT.
“Your first couple of ideas are the ideas that everyone else is going to have,” she says. “You have to keep working at it.”
Before communication design majors can graduate, they have to pass one final hurdle — a senior exit review. Otherwise, they must retake the final portfolio class.
Sinele remembers dropping off her final portfolio and going home to catch some much-needed sleep. Later, she returned to wait in the hall with her classmates as the tension soared.
When summoned by the professor, she walked into a classroom in the Art Building and saw a white piece of paper with her name on it. She turned it over. It said “pass.”
“I know I still have that piece of paper,” she says. “I just called home immediately. I think my mom was waiting on that phone call. They know the work you go through over the years.”

Center will expand College of Visual Arts and Design program

Sinele’s dedication earned her an internship in July 2003 with Crispin Porter in Los Angeles. She was later hired as junior art director at Los Angeles’ Davis Elen Advertising, eventually moving up to art director. She now serves as a freelance art director after having worked at L.A.’s TBWA/Chiat/Day, where she had national clients such as Energizer, Pepsi and Principal Financial Group.
Her preparation at UNT helped her gain the discipline she needs for the job, she says. Three or more teams of writers and artists might be working on the same assignment at her company, adding pressure to create the best ad.
“Your boss isn’t going to say, ‘I need to see a hundred thumbnails by tomorrow,’ but if you don’t, someone is probably going to come up behind you and have done it better,” Sinele says.

Heather Amuny-Dey (’97), creative director of global Nike brand design, began learning the trade from her father, a graphic designer in Houston. At UNT, she learned how to handle critique of work, she says.
“That’s one of the biggest challenges for any young designer, being able to separate yourself from how much passion you put in your work and have an analytical discussion about whether it works for the audience you are trying to reach,” says Amuny-Dey, one of the featured speakers at UNT’s International Conference on Critical Literacy in Visual Culture in 2008.
“It’s very easy to make design decisions that are arbitrary,” she says. “It’s much more complicated to make design decisions that are instantly readable by the audience, as opposed to just making it beautiful.”
She started working for Nike as a summer intern in Portland in 1997 and continued working through the fall while flying back to UNT for portfolio reviews with her professors. After graduation, she was hired full time as a designer.
At Nike, Amuny-Dey has worked on international initiatives such as Nike’s Global Olympic campaigns in 2004 and 2008 and the World Cup in 2006. She helped start Nike’s first women’s-only concept store — the company’s first stand-alone retail for women.
Through her job, she creates a visual direction — a concept that is illustrated through photography, typography, wording and more. She directs photo shoots, oversees a design team, works with company leaders on new concepts and does some daily designing. Design has never been a career for her, she says, but a way of life.

“There’s nothing but opportunities in the world of design, but you have to commit,” Amuny-Dey says. “You have to be willing to push yourself and invent new projects and make changes. It’s just one of those professions where you can never stop putting forth your best effort and never stop learning.”