From savvy communicators to burgeoning scientists, UNT’s students focused their talents this year to earn top awards in some of the nation’s most competitive academic arenas.

National honors poured in this spring as UNT students earned prestigious scholarships and titles. In addition to being one of only five universities in the country with four Barry M. Goldwater Scholars this year, UNT is the proud home of the nation’s best debater and logistics team. Another student earned a Fulbright fellowship and three became Rotary Ambassadorial Scholars – all are bound for study abroad. 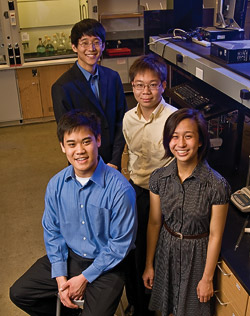 The four students who earned Goldwater scholarships, which are among the country’s most prestigious for individuals planning careers in mathematics, science and engineering, are Irene Cai, Wen Chyan, Jonathan Dau and Jeremy Lai. In the past 13 years, 43 UNT students have been named Goldwater Scholars.

The four 2009 scholars graduated this May from UNT’s Texas Academy of Mathematics and Science. Cai worked with Douglas Root, professor of biology, using computational models to examine muscle protein.

Chyan — who also earned $100,000 as the 2008 Siemens Competition in Math, Science and Technology winner — worked with Richard Timmons, chemistry professor at the University of Texas at Arlington, engineering new antimicrobial coatings for medical devices to prevent hospital infections. Chyan is the son of chemistry professor Oliver Chyan.

Dau worked with Jannon Fuchs, professor of biology, using mathematical models to develop methods for classifying and characterizing neural stem cells. Lai worked with Angela Wilson, associate professor of chemistry, helping to create a new computational method that would allow the study of large-sized molecules such as carbon nanotubes and next-generation fuels.

Before UNT’s Kuntal Cholera (’08) won the bragging rights as the top debate speaker at the 2009 National Debate Tournament, it had been 22 years since a student from a Texas university earned that honor. A senior economics major, Cholera ranked above 155 of the best collegiate debaters in the nation at the tournament.

And this spring marked the second consecutive year that a UNT team won the National Logistics Challenge, the fifth national title for UNT in the logistics program’s 10-year history. Team members are logistics and supply chain management seniors Tracy Booker, Kyle Hightower, Poh-Lynn Ng and Chris Walls. The team was sponsored by the Texas Logistics Education Foundation Center for Logistics Education and Research.

Gus Mercante, graduate student in the College of Music, has been awarded a prestigious Fulbright fellowship to study in Germany.

Three other students join more than 30 UNT students or recent graduates who have become Rotary Ambassadorial Scholars since 1998. The awards are for full academic years at foreign universities.

Music composition graduate Christopher Alan Hoyt (’08) will study at the Royal College of Music in London to prepare for a career as an organist and composer. Biological sciences major Christopher D. Vera plans to study at the University of Auckland in New Zealand to prepare for medical school. Honors College and radio/television/film graduate Lauren Williamson (’07) will attend the University of London to earn a master’s degree in international studies and diplomacy.