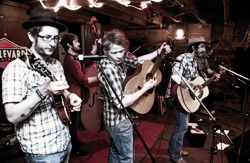 Bands and fans, panelists and promoters converged on Texas’ other music town, where UNT helped sponsor four days of 130 acts in nine venues.
Denton’s original music scene took center stage in March for the NX35 Music Conferette, which came to town after previous years as a showcase for Denton bands at Austin’s SXSW. The line-up included American Splendor writer and jazz critic Harvey Pekar, who spoke about experimental jazz to a well-versed audience, and bands with UNT ties. NX35 is the brainchild of Baptist Generals frontman and former UNT student Chris Flemmons.
“It went great for a first-time event,” he says, “but this is just where we started — no telling where we’ll end up.”
Planning for next year begins in July.
View the photo gallery and watch the video below.