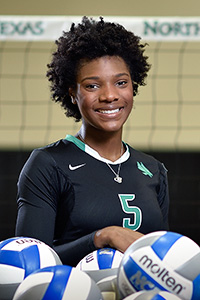 Mean Green volleyball player Carnae Dillard would be the first person to tell you that college was better than she ever could have expected.

Looking back on her college career, Dillard, now a senior, knows she made the right choice by coming to UNT to pursue a degree in kinesiology and play volleyball. She credits her supportive coaches, family of teammates and caring professors as the people who have made her time at UNT so special both on and off the court.

Dillard was born in Evansville, Ind., and because her father was in the military, she moved around a lot. Her family finally put down roots in San Antonio where she honed her craft for volleyball by learning different aspects of the game.

"I learned a lot (while playing) in high school because that's when I transitioned to different positions. I went from being a middle (blocker) to an outside (hitter). In my freshman year I was on JV, but I had a great coach and she just made that transition easier."

Although she started playing volleyball when she was just in 6th grade, Dillard believes it's those high school years spent playing club volleyball that really taught her what she knows about the sport and about herself as a player.

"I would say I learned a lot from playing club volleyball. You get to see all the top people around the world, so it wasn't in just San Antonio or in Texas. We made it to state playoffs my senior year, but in club ball you get to see a lot of girls play from all over the place. They were all the best of the best. "

Watch Beyond The Green: Carnae Dillard 'Chasing the Dream'

When it came time to choose where to play at the collegiate level, Dillard had several options: Texas State, San Angelo State and UNT. The choice was made easy, however, when she stepped foot on the UNT campus. She knew that Denton was where she belonged.

"As soon as I came on campus I just felt like I was at home," she says. "It was so close knit. I just loved the campus, being here was just such a great feeling."

Not only did UNT feel like home to Dillard as she began to explore the campus, her future teammates and coaches that she met helped seal the deal for her.

"The coaches that recruited me were just so loving and I really liked the girls here, so with all of that I just felt like UNT was a big family."

Dillard says that even though the transition from high school to college was a scary one, UNT and the athletics department helped her and her teammates by making sure they stayed on top of their academics and offering support and tips whenever needed.

"They provide great tutors," she says. "When you first come in as a freshman you have required tutoring hours. So if you don't make those, you're in trouble with your coach. So coming in, they want you to get a high GPA."

She credits many professors for assisting her and supporting her along the way. One of those professors is psychology professor Matthew Schumacher.

"I remember learning a lot in his class," Dillard says. "He always made it fun and I just learned really well with him. He always wanted us to succeed and I wanted to succeed as well."

Dillard also credits her coaches for supporting her and pushing her to do great things, including becoming Conference USA's Offensive Player of the Week five times and being named to the Conference USA All- Conference First Team twice.

"With volleyball, they've just had great coaches come through. My first year I had a different coach than I do this year, but I think both coaches have helped me grow as a player and have showed me that I can be better than I thought I could be by giving me confidence and telling me I could do it."

One of those mentors is head volleyball coach Andrew Palileo who joined the athletics staff in 2013.

"(Carnae) has a great character and is a great person," says Palileo. "She has a great time with her teammates and is always willing to help. She has been a great ambassador for the game and has remained humble."

As for now, Dillard is ready to enjoy her senior year and the volleyball season with her teammates.

After graduating in May, Dillard hopes to take her talents overseas by continuing to play in Switzerland or Italy. She then hopes to return to Denton to further her education with a master's degree at UNT.

"I think I'll be back in Denton, maybe shadowing a coach at UNT," she says. "I want to get better at that and then get my master's. My ultimate dream is to be able to coach at my high school in San Antonio."

In addition to that, she hopes she can continue to be a role model to young children – especially young girls.

"I want to make a difference in the coaching world and teaching young girls what I know because I've been through it," she says. "I feel like I can teach girls what I know and have them come at playing the game from a different direction. I want to be able to set them up for success, not only playing volleyball, but in life."