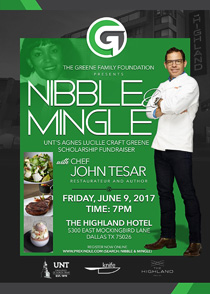 The inaugural event is presented by The Greene Family Foundation and will raise funds for UNT's new Agnes Lucille Craft Greene Memorial Scholarship. Greene's wife, Agnes ('73), whom he met when they were students at UNT, died from breast cancer in 2015. The scholarship in her honor will be awarded to UNT students who are breast cancer survivors or who have a parent or guardian affected by the disease. The family foundation was established last fall by the couple's children, Major ('91), Delon ('93) and Joquel.

Nibble & Mingle will take place at 7 p.m. Friday at the Highland Hotel, 5300 E. Mockingbird Lane in Dallas. Knife steakhouse chef John Tesar, who twice appeared on the television show Top Chef, will provide the culinary creations along with other participating restaurants.

Guests will have the opportunity to bid on sports memorabilia, a VIP trip to the Pittsburgh Steelers training camp, and a package that includes tickets to the Class of 2017 Pro Football Hall of Fame induction ceremony as well as tickets to the Hall of Fame game between the Dallas Cowboys and Arizona Cardinals.

Tickets are $125. For information, visit the Nibble & Mingle Scholarship Fundraiser page or The Greene Family Foundation Facebook page. You also can make a donation to the scholarship online.

Former Mean Green player Jamize Olawale, now a fullback for the NFL's Oakland Raiders, and his wife, Brittany, are back in town finishing their UNT degrees and remembering what's special...