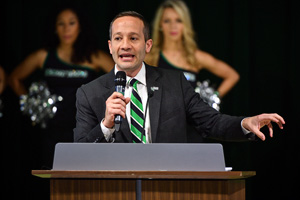 Grant McCasland, an 18-year coaching veteran with 10 coach-of-the-year awards and a career winning percentage of 80 percent, has been hired as the men's basketball head coach at UNT. He replaces Tony Benford, who had coached for five seasons.

McCasland comes to UNT from Arkansas State, where in 2016-17 he led the team to 20 wins for only the fourth time in school history. That was a 10-win improvement over the previous season and the second-best turnaround in NCAA Division I basketball for the year.

"I am extremely excited about the opportunity to serve as the next head basketball coach at the University of North Texas," says McCasland, a native of Irving. "We are going to strive daily for excellence in every aspect of our program, do things the right way, and establish a winning culture that values relationships throughout. Our family looks forward to joining Mean Green Nation and I can't wait to get started in Denton."

Prior to joining Arkansas State, McCasland was an assistant coach for five seasons at Baylor University, where he helped lead the Bears to four NCAA Tournament appearances and the National Invitational Tournament championship, their first postseason title in program history. As head coach at Midwestern State, he led the program to back-to-back Elite Eight appearances in the NCAA Division II Tournament. And as head coach at Midland College, he led the team to the NJCAA national championship.

He began his coaching career in Lubbock as director of basketball operations at Texas Tech and was an assistant coach at Northeastern Junior College in Sterling, Colorado, before joining Midland College.

McCasland played basketball at Baylor and earned Academic All-Big 12 honorable-mention honors as a senior. He earned his degree in entrepreneurship and management there in 1999 and earned a master's from Texas Tech in 2001.

"At every step of his career, he's demonstrated that he is a winner," said Wren Baker, vice president and director of athletics, at an introductory show for McCasland that was streamed live March 14. "He produces teams that win on the court and athletes who win off the court. He's a proven recruiter. But most of all, he's a high-character person. He understands our expectations and is incredibly enthusiastic about our very bright Mean Green future."

McCasland and his wife, Cece, have two daughters, Amaris and Jersey, and two sons, Jett and Beckett.

Fans interested in 2017-18 season tickets can fill out a form to be contacted when they go on sale.

Former Mean Green player Jamize Olawale, now a fullback for the NFL's Oakland Raiders, and his wife, Brittany, are back in town finishing their UNT degrees and remembering what's special...