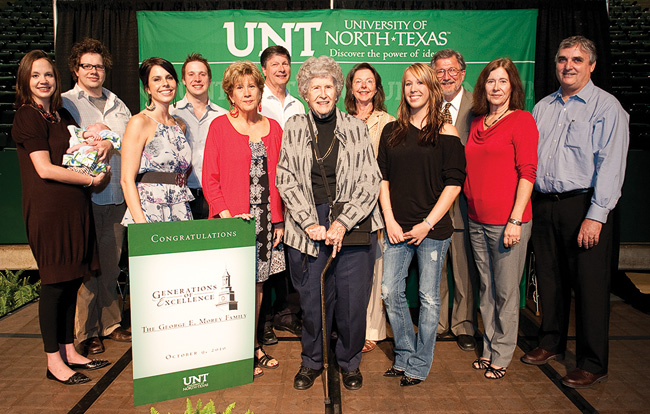 A passion for music and teaching brought the young George Morey and his wife, Patricia, to North Texas in 1947 from Murray State University in Kentucky. George was a woodwinds teacher, and Pat taught piano. 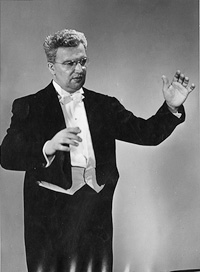 Throughout his distinguished career at UNT, George was an influential teacher and mentor, serving as professor of flute and teaching composition. He also was the conductor of the UNT Symphony Orchestra for 25 years.

“There were so many opportunities for them here,” says Pat, who took German classes herself after her youngest started school. Of Pat and George’s 17 grandchildren, nine have attended UNT, with five finishing their degrees to date.

“Mom and Dad loved learning, travel and music,” remembers Margaret Morey Payne. “My mother at the piano often accompanied my father playing flute or viola, with our beagle, Hans, howling in the background. And that, combined with teenagers who loved all kinds of music, made for a musically diverse home.”

That same joy for music passed to the third generation of Moreys. Grandson Matthew Morey (’10) earned his bachelor’s in jazz performance, and grandson Michael Morey Jr. is working on his doctorate in music. Bridget Morey Davis’ son Keith Davis is a professional musician and recording specialist. Katherine Morey Jenkins’ children all have a great love for music. Margaret’s son, Russell Payne (’06), who studied emergency administration and is now in medical school, plays guitar.

After George retired in 1980, he and Pat took in musical events at famous venues around the world. Vienna and London were favorite destinations.

The two spent their lives stressing the importance of an education to their children.

“We all went to North Texas, not just because it made economic sense with five kids,” says George Patrick, a retired executive, “but because North Texas is a first-rate university. My education has blessed my life.”

He and his wife, Nesha Stone Morey (’73), recently gave scholarships to UNT in music and business because they want others to have the opportunities they have had.

“Nesha and I have had a good life and our education is part of that success,” George Patrick says. “We feel an obligation to give back, a desire that comes from the example set by my parents. My father tutored adults in reading at the public library and experimented with music as a tool to communicate with autistic children.”

George and Pat were active in their church and delivered Meals On Wheels to the elderly, work that Pat at 88 still continues.

In Saint Jo, where Margaret lives, she met a woman who knew her dad.

“I thought she remembered him as the well-known orchestra director at UNT,” Margaret says, “but she said, ‘George Morey? Your dad delivered meals to my dad.’”

His family says George Morey’s legacy was his ability to genuinely care about and help people.