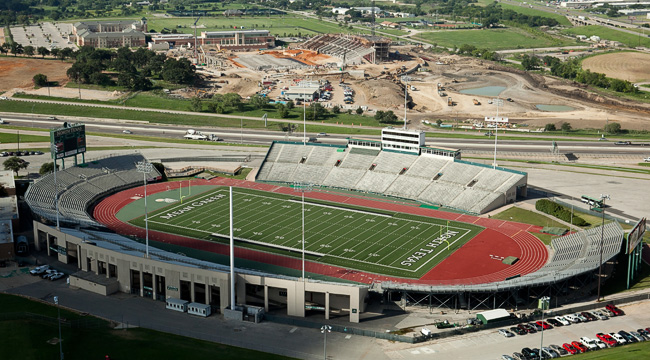 One worked for the field's namesake. Another found a career at UNT, while another was part of the historic racial integration of football in Texas. These and other UNT alumni have fond memories of Fouts Field, which hosted its last football game Nov. 27.

The stadium opened in 1952 and has been home to the Mean Green for 58 years. It will be replaced by a new stadium that will feature state-of-the-art amenities - just as Fouts Field had the latest and greatest of its time. The new stadium, under construction and looming south of Interstate 35W a few hundred yards from Fouts Field, will seat about 30,000 people. It is designed to meet environmental and energy efficiency certification guidelines to be the first college football stadium in America that earns Leadership in Energy and Environmental Design (LEED) silver certification. It will be ready for the 2011 season.

In the Nov. 27 game against Kansas State, Mean Green running back Lance Dunbar rushed for 270 yards and three touchdowns, but the Mean Green came up just short of the Wildcats, who won 49-41. Former UNT players from 1950 to 1959 were honored, as the athletics department honored players from past decades at each home game this season.

From the first racially integrated football game to winning the Sun Belt Conference championship, Fouts Field is the center of many special memories. The following are reminisces from UNT community members: 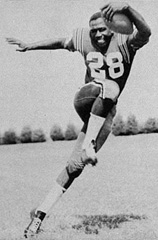 Abner Haynes, left, played for the Mean Green from 1956 to 1960. He was a member of the 1956 freshman team and, along with teammate Leon King (’62, ’72 M.S.), brought racial integration to Texas football. Haynes joined the American Football League's Dallas Texans and won the 1960 Player of the Year, All-Star and Rookie of the Year awards.

"I remember Fouts Field as one of the few stadiums that was integrated. There were many games where I was able to look up in the stands and see my brother, his wife, my sister and her husband, and I knew that wasn't permitted at all stadiums.

"I recall the first day of practice and the process of meeting my teammates for the first time. All of that took place at Fouts Field.

"I remember President J.C. Matthews being at the stadium to ensure there were no problems with me and Leon King, the two new black players, to integrate the university.

"I fondly recall the 8-7 victory over Tulsa in 1959. This game matched two one-loss teams and was for the conference championship. We had a great time.

"Students, faculty and staff were all excited about Fouts Field when it opened in 1952. I scored the first touchdown in the new stadium in the game against North Dakota. North Texas won 52-0."

Bahnsen went on to play for the NFL's San Francisco 49ers and coach football and baseball at McNeese State University before returning to join the UNT kinesiology faculty. He taught for 48 years, including 25 as tennis coach. He also taught teachers of driver's education and still teaches defensive driving classes at UNT, with the money going toward scholarships.

His namesake, the Ken Bahnsen Gym, formerly the Men's Gym, is part of the physical education complex. He was named to the Athletic Hall of Fame in 1991.

"I worked for Athletic Director Theron J. Fouts, Coach Dee Walker (’40) and the athletic department from 1949 to 1951," she says. "I was fortunate to be around when all the plans were made to build and name the stadium for Mr. Fouts. We must have looked at those plans hundreds of times.

"The Ex-Lettermen 's Club was formed and through their efforts money was raised for a lettermen's lounge. For many years, we enjoyed time before games and at halftime at the lounge.

"Some other very special times were the fish fries or barbecues that James Rainbolt (’58) did on Friday night kicking off our golf classic for some 20 years. There usually was 175 to 200 friends that enjoyed each other's company and reminisced about the glory days. What fun we had."

Bettye and Zeke’s sons, Steve and Gary Martin, attended North Texas in the 1970s. Steve says his fondest memory of Fouts Field was watching his dad play football in the alumni games back in the early ’60s.

"We were so excited to see all the former North Texas stars and professional football players such as Ray Renfro, Joe Abbey and Abner Haynes. This was a big deal to us. We collected the chin straps from these stars, then got their autographs on them. I had quite a collection.

“At the football games, especially Homecoming, we couldn‘t wait for the end of the game so we could run down on the field, climb the goal posts and pull all the streamers off.

“I remember when I was a student at North Texas, there was a concert being held at Fouts Field and my fraternity buddies and I didn‘t have enough money for tickets. We really wanted to see that concert. I remembered as a kid that there was a hole in the fence covered up with huge shrubs on the north side. Sure enough, we checked it out and the hole was still there! Boy, did we enjoy that concert!”

“At the 1964 alumni game – I was 11 – he introduced me to Abner Haynes, who at the time was playing for the Kansas City Chiefs in the AFL. Haynes and a couple of other guys entertained the crowd at halftime with their band, and Haynes put me in charge of holding his KC Chiefs helmet while he performed! I was star struck!

“Another great memory was two years later.  I wanted a shotgun to go dove hunting. So, I got a paper route and a job selling Cokes in the stands at the football games at Fouts Field. Cokes were 25 cents and I made $1 a tray! The best game for selling Cokes was Homecoming and the best section for sales was the fraternity sections. I didn‘t understand why they immediately poured out half their Cokes until I was a student at North Texas and sat in that section! Great memories!”

Hank Dickenson, left, is deputy athletic director. This was his 16th football season at UNT.

"The table was set Nov. 16, 2002, at historic Fouts Field – UNT versus New Mexico State. The top two teams in the Sun Belt Conference were squaring off for a winner-take-all contest to decide the league champion and New Orleans Bowl participant. The fall weather was perfect, the crowd was terrific and the game was even better.

"It was a back and forth game with six lead changes heading into the fourth quarter when the Mean Green would force four Aggie turnovers, turn them into 17 points and pull away from NMSU to win 38-27. It was one of the defining games of the early 2000s, featuring the dominant UNT defense led by Booger Kennedy – 10 tackles that day – and the great ground game, featuring Kevin Galbreath and Patrick Cobbs (’05), who were inducted into the Athletic Hall of Fame this year.

“Andrew Smith, a redshirt freshman quarterback led UNT that day, and with the win, UNT secured its second straight trip to a postseason bowl game. Smith tragically lost his life in a car accident the next summer, but his leadership on that day was huge.

“Another memory that stands out from that game is the fact that fullback Michael Hickmon (’02) scored three touchdowns. Hickmon had considered quitting the team earlier in the year because he was not able to be a featured running back, but had a change of heart and committed to a new position. He was an absolute force on that day and a huge reason that UNT rushed for nearly 270 yards vs. NMSU.

"When the game was over, UNT students mobbed the field and tore down the south end zone goal posts. I still have a piece of the goal post at my house. For anyone that has ever questioned school spirit, outstanding football and great atmosphere at UNT – they should have been at Fouts Field on that day. It was the best of my 16 years spent there.

“As an additional note: UNT would win the next week at Middle Tennessee to finish the regular season at 7-5, perfect in the Sun Belt Conference, and would go on to win the New Orleans Bowl by defeating Cincinnati 24-17. It was the first bowl win for the Mean Green since 1946.”

Steve Selby, left, was athletic business manager in 1971-73 and director of the Coliseum, Main Auditorium and Gateway Center from 1990 to 2007.

"Having grown up in Denton, it would be hard to count the number of football games and track meets that I have attended and/or worked at Fouts Field. During my junior high and high school days, I worked in the concession stands.

"As a student athletic trainer, I got to see some great football with Mean Joe Greene (’69), John Love (’72), Steve Ramsey (’74), Vidal Carlin (’76), Ron Shanklin and Glen Holloway – all Hall of Fame members. I worked as a trainer during Coach Odus Mitchell's retirement year. In the last game of the year, NTSU scored 42 points – one for each year he coached.

"I remember a game in the ’70s when we played Florida State University in the afternoon. It snowed about six inches that day. Some FSU players had never seen snow before. Needless to say, it was a little hard to mark where the ball was.

"I was a football official for 36 years and worked many games and scrimmages on Fouts Field. A highlight in 1991 was working as a game official for the movie Necessary Roughness. That was quite an experience and one that I will always remember fondly. The rest of the family – wife Kay Martin Selby (’70), retired director of academic publications, daughter Stephanie (’97) and son Kristopher (’07) – worked as extras on the film.

"I graduated from high school on Fouts Field. Kay and I were supposed to graduate from North Texas on Fouts Field, but it was raining that day, so we graduated in the Men’s Gym (now the Ken Bahnsen Gym) – nice and hot!

"Kay and I met in an education class and our first date was to the Homecoming Game in 1969. We married and graduated that spring.” 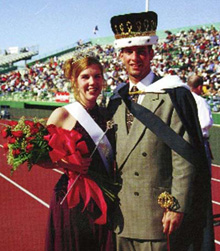 "My first memory of Fouts Field is from the first football game I attended my freshman year in fall 1997," says McLendon, who became manager of Eagle Ambassadors after graduation, and now is manager of Visitor Experience.

I remember thinking, 'This is nuts! I love North Texas!'

I will never forget hearing my name over the loud speaker as my good friend Dustee Tucker Jenkins (’01) crowned me Homecoming queen two years later. That was a pretty cool moment and one reason that I will always feel connected to Fouts Field."

Got a favorite Fouts Field memory? Send us an email at northtexan@unt.edu.