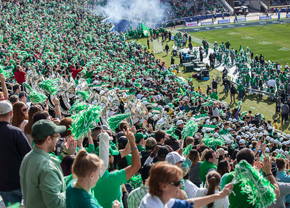 Propelled by one of the best turnarounds in college football this year, the Mean Green earned a bowl invitation and played Army in the Zaxby's Heart of Dallas Bowl Dec. 27 -- the ninth bowl game in the university's history. But the team fell short of bowl win glory, losing 38 to 31 in a hard-fought game that went into overtime. More than 39,000 fans attended the game at the Cotton Bowl. Get game highlights.

It was the Mean Green's second game against Army this year. On Oct. 22, they defeated the Black Knights in West Point, New York, 35-18. UNT earned a bowl invitation because of the team's NCAA Academic Progress Rate, which ranks in the top 10 nationally among Football Bowl Subdivision teams.

Despite losing the bowl game, the Mean Green had cause to celebrate because of a strong debut by new head coach Seth Littrell. This was only the second time in the program's history that a first-year head coach led the team to a postseason bowl game, marking 70 years since Odus Mitchell was the first rookie coach to do it. 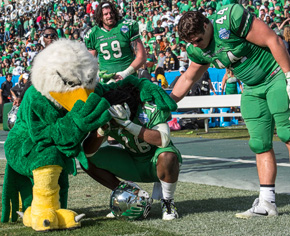 Littrell helped the Mean Green finish the regular season with a 5-7 record after a 1-11 season a year ago, the second-best turnaround in the nation.