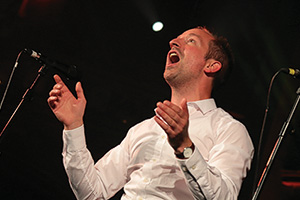 An overwhelming international response to a Facebook post by London-based singer and UNT alum Michael Solomon Williams inspired him to write a song that brought musicians together from around the world.

After several divisive events, including Brexit and the assassination of British politician Jo Cox in 2016, Solomon Williams -- who was an exchange student at UNT from Leeds in 2003 and 2004 -- wrote "Human Kind."

The song was recorded at the end of a collaborative concert in London by hundreds, and later completed with contributions from nearly a thousand solo artists worldwide.

"This song seems to have a lot of life in it!" Solomon Williams says.