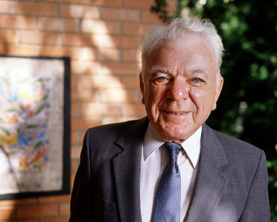 Robert B. Toulouse, Provost Emeritus of UNT and longtime dean of the university's graduate school -- which was named in his honor -- died April 11, 2017. He was 98. An educator and administrator who spent nearly 40 years at UNT, Toulouse was best known for building its graduate school into one of the largest in Texas by the 1980s and establishing many of its graduate programs.

Toulouse spent his higher education career at UNT. Starting out as an assistant professor in the College of Education in 1948, he rose through the ranks to become UNT's provost, the second-highest leadership post. But many of his greatest contributions came while he was dean of the graduate school, a role that lasted from 1954 to 1982.

Toulouse helped make UNT one of the three largest graduate institutions in the state by the 1980s and the most comprehensive graduate institution in the North Texas region. During his 28-year tenure as graduate dean, UNT's number of graduate programs grew from a handful to more than 100 programs. Graduate enrollment increased from roughly 400 students to nearly 5,500, which at the time represented almost a third of UNT's total enrollment. And the graduate school raised its standards and retained more students due to the policies Toulouse established.

"Dr. Toulouse was a cherished member of the UNT family. As provost and our longest-serving graduate dean to date, he played an integral role in shaping our journey as a top-tier research university," President Neal Smatresk says. "We're so grateful for his contributions, service and unwavering commitment to UNT. His impact will be felt for years to come."

His focus on increasing UNT's graduate education quality and offerings dovetailed with his work as provost and his efforts to enhance research across campus. He led a change that required the university's research funding proposals to be peer-reviewed, which led to major increases in research funding and in the quality and impact of research.

As provost and vice president for academic affairs from 1982 to 1985, Toulouse raised undergraduate and graduate admission and degree program requirements. In 1990, after his retirement, he and his wife established the Toulouse Scholars Program Fund, which provides money for faculty research programs, helping to spur more research.

Rising through the ranks

Toulouse excelled throughout his life. The high school valedictorian earned his bachelor's degree before being drafted into the Army. He was assigned to the U.S. Army Air Corps, now the Air Force. After active-duty military service, he returned to college and quickly earned his master's and doctorate in education. He earned all three of his degrees from the University of Missouri and was a Peabody Scholar and Gregory Scholar.

When Toulouse joined UNT in 1948 as an assistant professor in the College of Education, he distinguished himself by carrying a full teaching load and helping to develop new curriculum.

By 1954, then-President J.C. Matthews appointed Toulouse as graduate dean. He described Toulouse as a "gentleman and scholar" who was singularly dedicated to UNT and its graduate programs. Toulouse's gentlemanly ways were evident. The longtime gardener adorned his office with African violets that he tended to carefully, believing they helped soften the workplace and make people more at ease.

Throughout his career, Toulouse focused on building UNT into a high-quality academic institution with excellent graduate programs and a strong research culture.

He retired in August 1985 as Provost Emeritus, but returned to UNT to serve as interim provost and vice president for academic affairs from 1989 to 1990 at Hurley's request.

In 1990, UNT named the Robert B. Toulouse School of Graduate Studies in Toulouse's honor. Now the Toulouse Graduate School, it offers 82 master's and 38 doctoral degree programs and is integral to UNT's status as a Carnegie-ranked Tier One research university.

"We're honored to carry on Dr. Robert Toulouse's great work," says Victor Prybutok, vice provost of the Toulouse Graduate School. "Our rise to become a Carnegie-ranked top-tier research university is due in large part to our success in enrolling and graduating master's and doctoral students. We couldn't have done that without the strong foundation Dr. Toulouse created in founding and developing our graduate school."

In his long history with UNT, Toulouse not only pushed the university to new areas of excellence, he also became one of the university's most ardent supporters along with his wife, Virginia. They believed in the power of education, and giving back was their way of creating more opportunities for learning.

They were members of the President's Council and established a charitable trust to support graduate student scholarships, in addition to establishing the Toulouse Scholars Program Fund. They also established the Samuel and Maybel Danford scholarships for undergraduate students in religious studies in honor of Virginia's parents. Toulouse also served on the UNT Foundation board.

Toulouse was one of the architects of the Federation of North Texas Area Universities, which is now a consortium of three universities: UNT, Texas Woman's University and Texas A&M-Commerce. In 1983, the federation honored him by establishing the Robert B. Toulouse Scholarship in recognition of his many contributions.

Toulouse was as dedicated to UNT as UNT was to him. He was twice honored with the UNT President's Award (1982 and 1990) and is the only administrator for whom a UNT college or school is named.

Longtime friend Richard L. Simms, Professor Emeritus of teacher education and administration, says Toulouse stood out for his vision for graduate education at UNT and for his quiet manner and dogged determination in moving our graduate programs ahead.

"It was in the Provost's Office that I had the privilege of working alongside him," Simms says. "I learned much from Bob Toulouse about higher education administration and I feel very fortunate to have had him as a friend and mentor across many decades."

A celebration of Toulouse's life will take place at 10 a.m. Saturday, April 22, at Denton's First United Methodist Church. He will be buried at DFW National Cemetery.

Timeline of Toulouse's service with UNT