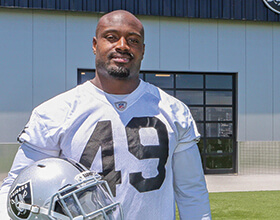 Describe NFL training camp.
Training camp is a grind for everyone -- it is designed that way to strengthen the individual and bring the team closer together. It has taught me how to be a professional and to overcome mental challenges. I actually look forward to the challenge every year.

What do you eat before a game?
I like to eat something that has carbohydrates for the energy and what I eat changes depending on the time of the game. For early games, I might have oatmeal and an omelet. For night games, pasta with grilled chicken is common.

What do you like best about the fans?
I love our fans' passion and loyalty. We were in a rebuilding stage during my first couple of seasons on the team and we didn't experience much success on the field, but our fans stuck with us and never wavered. Our fans deserve to be with us as we begin to see the fruits of our labor and hard work.

Which game stands out in your memory and why?
My first pre-season game as a rookie stands out the most to me. I remember stepping on that field in front of thousands of people and looking around thinking about how many times growing up I had envisioned playing in the NFL. It was a very surreal moment/game for me that I will never forget.

Where is your favorite place to play?
I love playing at the Black Hole, our home field. Our fans are passionate and the energy they bring fills the whole stadium. To say our games are loud is an understatement.

What moment stands out as the highlight of your NFL career?
Playing in my first playoff game in 2016 has been one of the more memorable highlights in my career so far. Only a select number of teams make it to the post-season every year and to be included in that was definitely a highlight. I'm looking forward to bigger things this season.

How did you feel when you made your first NFL tackle?
I was so happy. I thought to myself "no matter what happens from here on out, I will always be in the stats book."

What was your pre-game ritual?
Before each game I called my mom, dad, three brothers and girlfriend. I can't go to sleep without talking to all of them, and the morning of each game, I texted them as well. Also, before I took the field for each game, I made sure to take a sniff of the "smelling sauce" to wake me up!

What would people be surprised to learn about life in the NFL?
It's more mental than anything. To be a good player and to last on a team you have to be smart and be able to learn a thick playbook.

Which game stands out in your memory and why?
When we played the Dallas Cowboys in Texas, I was able to play in front of 60-plus family and friends. It had always been a dream of mine to play in the NFL and that day was something I'll never forget.

Where were your favorite places to play?
Besides playing at M&T Bank in Baltimore, Pittsburgh was my favorite place to play. As a Raven you learn to strongly dislike the Steelers and the combination of black and yellow. They're our bitter rivals and they can't stand us as well, so wherever we went to play them at their place we got booed and talked about all game, which I love! Dallas wasn't bad either.

What moments stand out as the highlight of your NFL career?
Running out of the tunnel in Baltimore, being introduced as a starting linebacker and becoming the Ravens' leading tackler. During the 2016 season, I led an NFL organization in tackles for a whole season. Another important moment for me was when we played on national television and NBC announced the starters and I got to say "Zachary Orr, the University of North Texas" as a proud alum. I was happy to represent the Mean Green!

What is the best advice you received from a college coach?
John Skladany, one of my linebacker coaches and a defensive coordinator, told me, "Strive for perfection, achieve excellence." I interpreted that to mean that nobody is perfect and things don't always go our way, but if you work for perfection and give your all, you can achieve excellence! It is something I live by each and every day.

Watch an episode from the second season of Mean Green Sports' Beyond the Green.

The Mean Green football team's winning 2013-14 season led to another victory -- this time, for Ashton Campbell ('03), executive producer of the Fox Sports Southwest series Beyond the Green.
Top