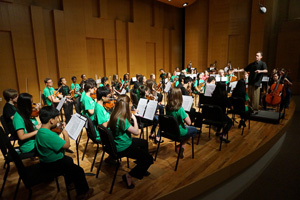 Summer means many things for many different people – vacations, swimming pools, ice cream and blazing heat. And it means summer camp. But few camps today hold the nostalgic memories of stereotypical Camp Winnetonkas, with wood cabins, canoes on the lake, archery lessons and scary stories told around the campfire. The modern summer camp is often less rustic and woodsy and more likely to be an actual educational experience. In fact, it looks a lot like the many summer camps held right here at UNT.

Many UNT colleges hold camps during the summer, with most being athletics and music camps. But there are also debate camps, engineering camps, aviation camps, journalism camps and more.

Among the many camps in the College of Music is the Summer String Institute, a two-week intensive program that welcomed 119 violin, viola, cello and chamber music students to campus this year. The institute is directed by Dr. Felix Olschofka, Associate Professor of Violin, and Dr. Daphne Gerling, Senior Artist Teacher of Viola and associate director of the institute.

In addition to Olschofka and Gerling as faculty directors, the institute features UNT faculty, including violin professors Julia Bushkova and Philip Lewis, cello professors Eugene Osadchy and Nikola Ruzevic, viola professor Susan Dubois, assistant director of orchestral studies Dr. Clay Couturiaux, and several distinguished artists from the Dallas Symphony, Dallas Opera and other universities. Four UNT students were counselors for the residence halls – all had backgrounds in music education and working with youth.

"The Summer String Institute is a very intensive program where each student receives a high level of one-on-one time with high-level artist faculty, more than they would get at other festivals," Gerling says. "And all for a reasonable cost, lower than that of comparable festivals, which allows students of more backgrounds to attend."

Another unique feature of the Summer String Institute is that it works with a broad age range of young artists, from middle school through graduate school age.

Gerling says the institute brings strong benefits to the university as well as the student attendees.

"The institute brings a lot of visibility to the College of Music," says Gerling. "Our student body for the camp is very international – students have come from Vietnam, China, Mexico, Chile, Brazil, Canada, eight U.S. states, and cities all around the state of Texas. It spreads UNT's reputation in the musical world and creates fantastic recruiting opportunities for UNT and the College of Music."

Gerling says the institute also involved the Denton community by providing several free concerts at the College of Music and UNT on the Square.

Learning On and Off the Court 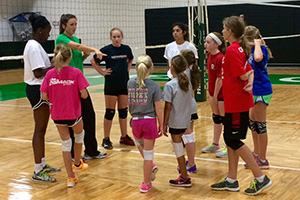 Music certainly isn't the only focus for campers at UNT. Athletics offered numerous camps in almost every UNT sport, including volleyball. Head volleyball coach Andrew Palileo runs UNT's volleyball camps in the summer, with the assistance of players on the team. There are multiple volleyball camps every summer, most focusing on a specific skill, like the hitter camp and the defensive camp, though the all-skills camp is an overnight event with students and UNT players spending the night in the residence halls. About 240 volleyball-loving kids have participated in this summer's volleyball camps.

"We try to employ our players as camp staff instead of outside coaches," Palilieo says. "They already know what the coaches' expectations are, and they do a great job as role models and mentors for the campers. We want our campers to look at our players and say 'I want to be a North Texas player someday.'"

Carnae Dillard, a senior kinesiology and psychology major from San Antonio and an outside hitter and captain of the Mean Green volleyball team, has been assisting with the camps since 2012.

"I think helping with the camps helps you become a better player," Dillard says. "Coaching the girls while I'm playing and sharing what I'm learning with them helps make me better, so it's worthwhile for them and for me."

"Part of why we do volleyball camps is to get exposure for athletics," says Palileo. "But we also want to promote the university. We send the girls on tours around the campus to help them get to know everything UNT offers. We want our campers to fall in love with the university, not just athletics." 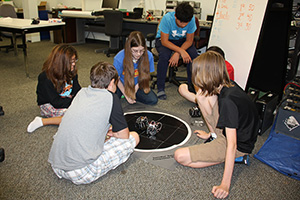 For kids interested in robotics and computer programming, the College of Engineering offers RoboCamp. The camp brings in about 60-80 students every summer to build and program robots, develop video games and create smartphone apps.

Computer Engineering labs technician Jim Buchanan helps run the RoboCamp sessions every summer. He says the camp uses a collection of small robots built from kits. The SumoBots are named for their squat shape and signature fighting style – trying to push other SumoBots out of a circle before they get pushed out themselves. What makes each SumoBot different is how the campers program them to behave.

"The kids may program their bots to lunge at an opponent or try to skirt around to the side to push them around," says Buchanan. "That's really up to the kids – how they want to modify their programs, if they just want to run away from somebody and then attack them when they get close to the edge. The level of artificial intelligence is up to the kid and how much they want to program it."

But Buchanan says the camp isn't all about making robots fight each other.

Another popular part of RoboCamp has involved letting campers create simple games and apps, usually using templates so campers don't have to spend too much of their week learning advanced game theory and programming.

"Some of the campers will come in with some programming skills," says Buchanan. "But quite a few don't have any programming experience at all. We teach them what they need to know to complete those tasks. We give them some tutorials to show them how computer programs act and respond, and they learn quite a bit. But after they finish their tutorials, they're tasked to create their own game or their own app for a phone. So it kind of really requires them to learn a little bit along the way in order to do that."

Joseph Helsing, a doctoral candidate in computer science and engineering from Houston, says an important part of RoboCamp is making it available for everyone who wants to learn.

"RoboCamp promotes underserved populations in computer science, particularly girls," says Helsing. "We want to show them all the interesting things they can do if they get into this field. Our first camp this summer was about half girls. We had one kid who rode two buses and the train to get to us. They really want to be here, but that's a significant effort to come to camp. It's great to provide this to people, especially women and minorities, to increase the diversity of ideas in the program and department."

Helsing says the success of the campers often brings in their younger siblings, too.

"Parents show up on the last day to see what their kids have been doing," Helsing says. "They ask what other programs UNT offers, both for their kids who attended the camp and for their younger brothers and sisters. It's good for recruitment and for getting people started in the sciences without getting intimidated or scared, to let them wade into it at a young age."

Buchanan says they've been able to fulfill a long-standing goal this summer – making sure all the fees for the campers were taken care of by grants.

"Our goal with RoboCamp and the grants we've been working with has been to provide the camps for free," Buchanan says. "And this year, all of them were free. Associate Professor Robert Akl and Lecturer David Keathly were able to get the grants to cover all of our campers."

Every camp – and every summer – eventually has to end, and the post-camp blues can be even harder for UNT students who know they won't be able to help out at camps forever. But for Dillard, thinking of the looming end of her college career offers opportunities for more hopeful thoughts than melancholy ones.

"It's sad to know it's my last year," says Dillard. "Some girls I've seen every year at camp, and I get follows from students on Twitter. When they get good, they'll be able to say, 'Going to camp at North Texas helped make me good,' and that's all that matters."