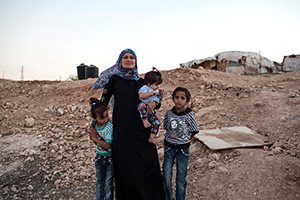 Tanya Habjouqa ('02) recalls intensely watching media coverage of Monica Lewinsky and the infamous blue dress scandal of the 1990s. She saw the coverage as a vilification of women, pedantic and almost like a soap opera in nature.

"I was disgusted and let down by mainstream media, which is why I decided to study anthropology instead of journalism," she says. "For me anthropology was a different, more respectful way of engaging and understanding people and diverse communities."

Habjouqa's background in anthropology is visible today in her career as an award-winning freelance photographer in the Middle East, where she documents the struggles and lives of women, as well as social and human rights issues. In 2014, she won the World Press Award for Daily Life Stories, her photo essay of the people living in Gaza, the West Bank and East Jerusalem.

"To this day I use that insight and the tutelage I gained from the anthropology department in my work," says Habjouqa, who was born in Jordan and raised in Texas.

She says she was pushed and engaged as a student thanks to the strong -- and sometimes tough -- guidance of faculty mentors Alicia Re Cruz, professor of anthropology; Steven Friedson, Distinguished Research Professor of music and anthropology; and master drummer Gideon Alorwoyie, professor of ethnomusicology and director of the UNT African Percussion Ensemble.

Habjouqa studied in Mexico and Ghana with her mentors through UNT study abroad programs.

More on UNT Leading the World

Read a feature story on Leading the World.

"Dr. Re Cruz allowed each of her students to focus on an element compelling to them as researchers, so I chose a visual analysis of familial and community ties in the barrio of the host family I was living with in Mexico," Habjouqa says. "It's important to work with professors who are practitioners and who have connections in these communities. You have to dig in and live it."

And Habjouqa did just that after her trips. She showcased her study abroad photos at local art galleries and studios.

"Those images were the basis for the photographer I would become," she says.

"People have a misconception of the Middle East," she says. "I felt drawn to return there because I saw the beginning of a dramatic point of history forming with U.S. foreign policy in the Middle East."

Emotional about what she saw unfolding in the media, Habjouqa says she turned to Re Cruz for guidance.

"I went to Dr. Re Cruz's office and I told her, 'I'm going to the Middle East,'" she recalls. "I knew it would be a life-changing decision. She calmed me and reassuringly with a smile said to me, 'I knew it.'"

It was the validation Habjouqa says she needed to move back to the Middle East to pursue a career as a freelance photographer. She has since earned her master's degree in global media and Middle East politics from the University of London School of Oriental and African Studies. She's also a feature writer and a founding member of the Rawiya photo collective, which was established by five female photographers from the Middle East and is the first of its kind.

"I've gone to graduate school but still haven't had a relationship with a professor as deep as the one I had with Dr. Re Cruz," she says.

Her current work has taken her to the front lines in Iraq, Lebanon, Darfur and Gaza and to the Museum of Fine Arts in Boston, where her series Women of Gaza is part of the museum's permanent collection. Her photos also are on display in exhibits across the world and published in national media outlets, including The New York Times.

"I like to find stories of people that are untold or misrepresented," Habjouqa says, calling her photography a "compulsion." "I want my work to make people think and question their perceptions, and when I've succeeded at that, I know I have done my job well."

She also wants her photography and writings to effect social change in Middle Eastern communities. She is currently exploring socio-political dynamics, identity politics, occupation and subcultures of the Greater Middle East.

"I'm able to do this work because UNT connected me with professors who inspired me, listened to me and empowered me," she says. "And pushed me to always go further."