Willie Barber, a pioneer in UNT's computer science program, still at work at 73 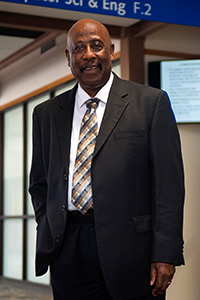 In 1977 Apple Computers released the first personal computer with color graphics, the first modem for home users hit stores, and Willie Barber ('77 M.S.) was in the first class to graduate from UNT with a master's degree in computer science.

"It took me 10 years to get my master's degree," says Barber, who recently came out of retirement at age 73 to operate mainframe computer systems for the Internal Revenue Service. "I was just so excited to have finally achieved that goal. At the time, I didn't realize I was one of the first. We were pioneers."

From the time he was a small child, Barber decided he was going to get his master's degree. Both of his parents only had an eighth grade education and he wanted to make them proud. He earned an undergraduate degree in mathematics in 1967 and was going to graduate school when he was drafted at the height of the Vietnam War.

"I was close to that degree, but Uncle Sam said it was time to go," Barber says.

Thanks to a summer spent working with computers, he was assigned to a position as a programmer for the U.S. Army in Germany.

"I spent two years in the service. I had a good military occupation. I was a computer programmer, working in the office of the deputy chief of staff," Barber says. "I was fortunate that both my brother and I came home from serving during Vietnam."

Learn more about
computing for the future

Find out how tech-savvy alumni solve problems and create technologies for ever-changing field.

He used his experience from the Army to continue working as a programmer, landing a job at Mobil Oil Corp. in Dallas in 1971.

"I was on my way, but I had not completed a master's degree," he says. "It was an unfinished personal achievement that haunted me every day."

With a family to support, Barber -- along with his friend Roy Rogers ('77), another programmer at Mobil -- began attending what was then North Texas State University.

"Roy and I decided to try out this new computer science program. We commuted from work to Denton daily. Sometimes we were even in the computer lab all night," he says.

While his friendship with Rogers grew, the newness of the school led to several other friendships and even a close relationship with his professor.

"Everyone was so friendly," Barber says. "Dr. Denis Conrady especially, he was one of the kindest gentlemen I ever met. He invited me to his house to talk about my thesis while we sat in his backyard by his pool. It was an ideal time to be a student. It is really amazing to know that we were the first students in this program."

After graduation, Barber's career flourished. He worked for University Computing Co. and the U.S. Department of Homeland Security and was part of an industry that was always evolving.

"Computer science changes so fast and you have to be flexible and change with it," he says. "When I started, we were working with card punches and binary fields. Now, one tiny chip can hold a massive amount of memory. We were the forerunners of it all."

As an IT specialist for the Internal Revenue Service, he completes programming on mainframe legacy computer systems. Barber is a father of four and a grandfather of seven and has been married to Mary Barber ('70), a UNT psychology alumna, for 47 years.