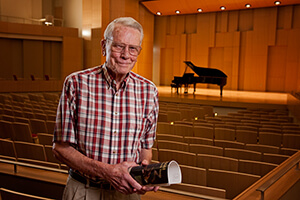 Paul wants people to remember him as being fair-minded. But he was so much more to so many people and so many organizations.

Paul was born in Denton on April 30, 1929, to Roy Fredrick and Helena Jacobson Voertman. He grew up with the Voertman Bookstore, which was established near the University of North Texas by his father in 1925. While Paul worked there during breaks from school, he never intended to run the store in adulthood ― he had planned to become a teacher. When his father died unexpectedly in 1951, Paul was 23 years old, in the Army and stationed in Germany. He returned home intending to run the store just long enough to make it saleable, but his retailing philosophy of providing outstanding service and high-quality goods at reasonable prices for customers made the store a great success. Under Paul's direction, the store became more than just a bookstore. The beautifully designed fine arts and housewares he also offered for sale made the store an iconic and cultural Denton landmark. He also operated a store near the Texas Woman's University campus. Paul was generous to his employees, and some worked at the stores for decades before Paul sold the Voertman's enterprise in 1990.

View the video from Voertman's celebration of life service.

Paul had a partner in operating the stores and in life. While on vacation in 1954, Paul met Richard Mathew Ardoin, who became Paul's life partner until Richard's untimely death in 2002. During their 48 years together, Paul and Richard shared many wonderful interests and experiences, including a love of travel, the arts and Bouviers. Paul commemorated their relationship with the gift of the $1.5 million Richard Ardoin-Paul Voertman Concert Organ in Winspear Hall of the Murchison Performing Arts Center at UNT. The concert organ was formally inaugurated in fall 2008, and it put the College of Music's organ program on the national map.

For more than 60 years, Paul was a strong supporter of the arts in Denton. In 1986, he received the Greater Denton Arts Council Recognition Award for bringing a sense of design to the city through his store, commissioning locally produced art works, sponsoring prizes for Texas arts organizations, and establishing juried art competitions for students at UNT and TWU, which were believed to be among some of the oldest privately sponsored competitive student art exhibitions in Texas. The Voertman Art Competition in UNT's College of Visual Arts and Design just completed its 57th year.

Paul attended the university through his first two years of college before transferring to the University of Texas in Austin, where he completed his bachelor's degree in economics. He returned to Denton every summer to take classes and work at the family store, where generations of students purchased their text books.

Paul was deeply committed to UNT and is among the university's most generous benefactors. His longstanding support has helped students fulfill their dreams of earning a college degree and becoming world-class performers, artists and scholars and helped the university make great strides in the arts and academics. His Voertman-Ardoin Memorial Scholarships are transforming lives by providing funding for first-generation college students. Excellence funds that Paul provided UNT's colleges have helped elevate the reputation of academic programs and address pressing needs.

In 2011, Paul made an $8 million bequest to UNT creating the Ardoin-Voertman Endowment funds, which will be shared equally among the College of Visual Arts and Design, College of Music, and College of Liberal Arts and Social Sciences.

In 2009, Paul was presented the UNT Outstanding Alumnus Award, for his loyal support of the university. In 2010, the university named a newly renovated performance space in the Music Building the Paul Voertman Concert Hall in his honor. Last year, Paul was awarded an honorary doctorate -- Doctor of Humane Letters -- from UNT for his devotion to creativity and artistic excellence, and his extraordinary achievements adding substantial knowledge to the community and society as a whole. He was a member of the UNT McConnell Society, 1890 Society and a lifetime member of the UNT Alumni Association.

For more than three decades, Paul also supported TWU through donations primarily to the Chancellor's Circle, athletics and student scholarships.

Paul's generosity was a mix of wanting to help make things better for individuals he found to be in difficulty -- particularly people disadvantaged by society -- and wanting to help places like UNT be the best they could be. He also was generous to many organizations in need and often as an anonymous donor. He supported the Denton Christian Preschool, Fred Moore Day Nursery School, Monsignor King Outreach Center, and PFLAG, among others.

Paul is preceded in death by his lifelong partner Richard Mathew Ardoin; by his parents Roy Fredrick and Helena Jacobson Voertman; and by his brother Robert Frederick Voertman and sister-in-law Betty 'Babe.'

Paul is survived by his niece Jami Paul Fernette and her husband Greg, and by his nephew Todd Russell Voertman. And, by his lifelong partner's family: Richard's sisters Lorraine Boudreaux and Rosalie Ardoin, and by his brother Mike Ardoin and Mike's partner Bryan Wille.

A celebration of life ceremony will take place at 4 p.m. Oct. 19 in the Murchison Performing Arts Center on campus.