Read about master's student Julie Libersat's recent award from the Contemporary Art Dealers of Dallas comppetition for the app she designed to explore art in an urban setting. 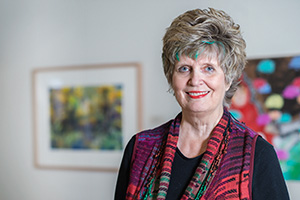 The road to the White House for Jo Williams ('69) started with her desire to help young artists.

Williams, president of the Visual Arts Society of Texas, has been an active volunteer with the Greater Denton Arts Council for years. Through the arts council, she was connected to U.S. Rep. Michael C. Burgess' office so that she could act as juror for a high school art competition for students from the 26th District.

A few years after that, President George W. Bush and first lady Laura Bush put out a call to all representatives asking for ornaments from each of their districts. In 2008, Williams' ornament of an armadillo and bluebonnets with a Texas flag in the background was chosen for display on the White House Christmas tree.

"Mrs. Bush did an interview with Good Morning America and when they were filming, she went to the tree, picked up my ornament and showed it to everyone," Williams says.

To celebrate, Williams and a guest (she chose her granddaughter) were invited to the White House to hear Mrs. Bush speak.

"It was wonderful," Williams recalls.

It was just one highlight in an art career that has spanned more than 30 years, from her days as an art teacher to her active role in public art.

"I think people appreciate public art," Williams says. "But it's also necessary to enhance the lives of those in the community."

In 2006, after years of concentrating on her own art and teaching others, she accepted a role with the city of Denton leading the city's Public Art Program, where she served for the maximum of six years.

The program commissioned pieces and had pieces donated. All were placed in public spaces in the city, including the historic square, where November Devil by alumnus David C. Iles ('77 M.F.A.), a bronze sculpture that looks like a tornado, was installed.

One of the biggest projects the program commissioned was that of the book Passion * Art * Community by Karla K. Morton, the 2010 Texas State Poet Laureate. Morton wrote poems about Denton's history for the book, and community artists illustrated her poems in paintings and other media.

The book allowed the city's program to reach out to many artists and residents in the community and showed the importance of art, says Williams.

"The world would be a colorless place without art," she says.