Learn how alumna Jo Williams ('69) has made a difference in the Denton community as an active watercolor artist. 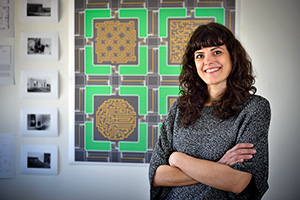 Art in public places can challenge a viewer, but what about when a public place is the medium for an art project?

UNT graduate student Julie Libersat is working on a mobile phone app called “ROAM” that helps users get lost in the city and encourages them to document their journey.

Libersat, who is pursuing master’s degrees in art education and in new media, won the first Contemporary Art Dealers of Dallas’ CADD FUNd Competition on Nov. 16. The $5,500 from the competition is funding the software development for the app.

The app is an interactive game that facilitates urban exploration and creative mapping. Players enter their start and end locations and how long they want to “play.” Then, rather than showing them the most direct route to their end point, the app reroutes them on a path optimized for disorientation. Along the way players are prompted to record their experience and interact with the environment.

“The app will give you directions, such as ‘turn left,’ but it also will direct you to take in your surroundings and do something -- for example, ‘look for something red and take a picture,’” Libersat says. “I’ve been interested in play and games from an art education standpoint, and I’m also interested in architecture and space.”

Libersat first developed the concept during research in a class of Adetty Pérez de Miles, assistant professor of art education and art history, for a research presentation at the National Art Education Association Conference. This research proposed using creative cartography as a way for students to engage with architecture and the city. Then, in an independent study lab, Libersat received guidance from new media associate professor Ruth West that allowed her to further develop the concept and explore possibilities for participation and exchange.

“We are isolating ourselves in our cars,” she says. “Part of the game is that it encourages you to explore your city. Getting lost helps you notice the world around you and makes the familiar new again.”

When she presented the idea for the app at the CADD FUNd event, she received a lot of questions from the crowd. That showed that the idea for this resonated with people, says Libersat.

“Your results from the app can be shared with others,” Libersat says. “When you reach your destination, everywhere you have been and the videos and photos you took are tagged onto a map. Everyone creates a representation of their journey and the resulting map is created by many players, giving an experiential representation of space.”

Libersat will work with software developers and in independent study through the spring and summer to make the app a reality. At the fall 2015 CADD FUNd event, the audience, which votes for the winner, will hear an update on her progress and expect to see the finished project, she says.

Libersat credits Pérez de Miles and West with helping her develop the idea and photographer Dornith Doherty, professor of studio art, with encouraging her work. The app is important, Libersat says, not for its money-making value but primarily for how it will affect people as they create their own shared art in a public setting.