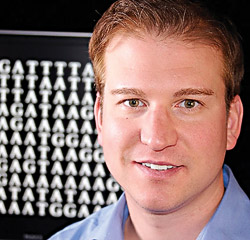 A National Geographic documentary on codes, ciphers and cryptographs included an appearance by Ryan Garlick, visiting assistant professor of computer science and engineering. Garlick’s Symbolic Processing class attempted to crack the code of the Zodiac killer and attracted the attention of the producers of Code Breakers, which premiered in March on the National Geographic channel.

Nearly 40 years after the California serial killer confounded police and the public with what would be known as the 340-cipher (containing 340 characters), it remains unsolved. Garlick’s class attempted to crack the code last year by developing software capable of breaking substitution ciphers.

“We don’t know if the cipher will ever be solved,” Garlick says. “We brought a few new techniques to the table along with considerable computational resources, but for the time being, the solution has eluded us.”