Watch "Life at Best" by the Eli Young Band on YouTube. 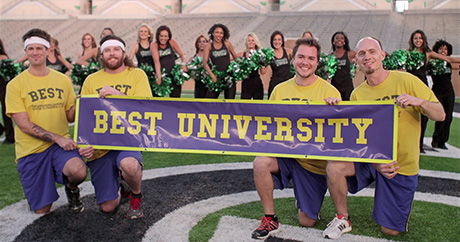 The UNT campus has a starring role in the new Eli Young Band webisode "Life at Best." The members of the band — Chris Thompson ('04), Mike Eli ('04), James Young ('02) and Jon Jones ('04) — were fraternity brothers and roommates at UNT more than a decade ago. They returned in the fall to film the webisode of fun experiences on campus, including archery and dancing at UNT's Apogee Stadium and fishing in the fountains.

More about
the Eli Young Band

Read about UNT Alumni Working Together

The band is nominated for three Academy of Country Music Awards this year: Song of the Year, Vocal Group of the Year and Single Record of the Year. To cheer them on, watch the 48th annual ACM Awards April 7 on CBS.