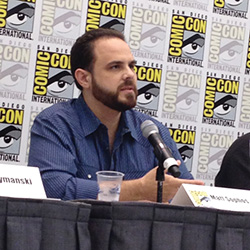 As a sports reporter for the North Texas Daily, Matt Sophos had to produce stories under pressure -- a skill he uses now as a writer and director for video games.

He earned a nomination from the Writer's Guild of America for the videogame Lost Planet 3. Sophos, a radio/television/film major and journalism minor, attended UNT from 1994 to 1998.

For Lost Planet 3, he created the characters, cast the actors and served as director on the motion capture stage and in the voiceover booth.

"While it was a tremendous amount of responsibility and stress, I learned a lot about myself and wouldn't trade the experience for anything," he says. "Well ... maybe I'd trade parts of it for some of the hair I lost in the process."