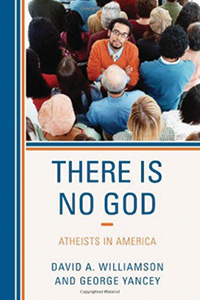 They were inspired to write the book after interviewing about 2,500 people for their 2012 book What Motivates Cultural Progressives? and found a large sample of atheists who had provided extensive information on their attitudes toward the cultural and religious right. Williamson was struck by the intensity of feelings atheists have toward the far-religious and political right.

"Rationality they understand. Faith they don't," he says.