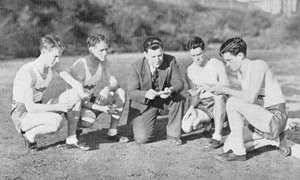 A new knitting team, coached by Miss Mary Bert McCoffee, is to replace the Eagle track team, according to an announcement by Dr. Barold Henholtz, new athletic director. "Aw, geez!" was the unanimous comment of members of the track team. "Track is no fun anymore. We've beaten everybody in Texas and Illinois, why not let's do something exciting like knitting?"

Renamed The Wampus Cat for this issue 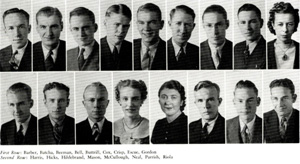 Local police, boy scouts, C.C.C. workers and the National Guard are frantically seeking any trace of the lost Math Club which disappeared last night. The club composed of thirty-three members met at its usual place at 7:30 but when the janitor went to close the building at 10:30 there was no sign of the club or its members. … The only clue found was some unfinished problems. As far as experts have been able to discover, the members seemed to be working on the problem of the fourth dimension.

Renamed The Slander Standard for this issue 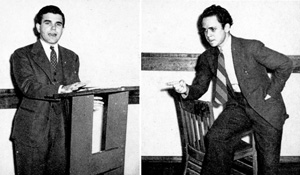 Arguing on the question, "Resolved: That the Registrar's Office Should Pass Out Gin Instead of Grades at the End of the Semester," Fuller Cider's blue-bearded debaters, Carousal Trellis and Hack Soppins, brought home the tin cup for winning first place at the annual Arguers' Forensic at Krum yesterday. More than 2,000 universities and kindergartens from all over the United States were represented at the free-for-all.