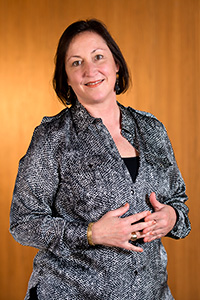 Stephanie Clift ('98) first came to UNT in the fall of 1979 as a fashion design student.

She left to work as a fashion stylist, and spanned jobs as a food stylist, art director for a film company and furniture designer. Selling her furniture to wholesale trade markets, she found that working with architects and interior designers was inspiring.

"I would be in the showrooms and think, 'I want to work with more than just my designs. I wanted to space plan and mold a space,'" Clift says.

This journey brought her back to UNT in the mid-1990s because it had a strong interior design program with national accreditation.

Now, several careers later, she's right where she wants to be -- working in Shanghai as director of interior design for Dallas-Shanghai-Hong Kong Duncan Miller Ullmann (DMU).

Clift's parents met and married in Shanghai, so having grown up with the stories, food and culture, she was intrigued by the opportunity to explore the route they had traveled. She jumped at the opportunity to help set up a company office there.

"It has been an opportunity to trace back my heritage -- which I was able to share with my mother before her passing in June of 2011 -- and her good memories of Shanghai. And the creative opportunities are far greater than anywhere else I have worked," she says. "You design to the client's vision. While it may not be to my taste, it pushes the boundaries of what I thought I could do."

Clift specializes in hospitality design of hotels, restaurants and bars but she also works with developers who are building office towers, clubhouses, model villas and apartments.

And she often gets to do it from the initial building stage with new construction.

She says when her team designs a hotel, they think of the journey that guests take from the entry experience to their guestroom. Inspiration can come from a poem, nature, cultural heritage, art or a found object.

"We design a space to make it a pleasurable experience," she says. "In China, as everywhere in the world, people want their hotel stay to be an experience they do not have at home. It could be more formal or fun."

Clift says that conducting business in China can involve more formal processes, such as a tea ceremony, whereas in the United States, deals can move much more quickly. And in her seven years in China, she's seen vast changes in the country and culture, and she says the Chinese know they are in the midst of transformation.

Clift recently visited UNT to discuss potential internships for students and recruitment efforts in China. And when a group from UNT came to Shanghai several years ago, it led to the establishment of an alumni group that meets quarterly. Clift is the group's president.

She says she loves working overseas, which has allowed her to travel across the Asian region.

"Many cultures, which I studied in art history and seemed such a distant world away, I'm now able to visit in person," she says. "I've seen and done things I wouldn't have been able to do without my job, and what a great journey in life it is."