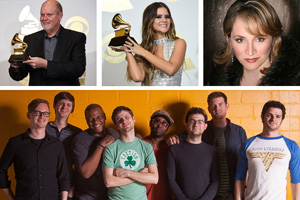 The Mean Green was well-represented at Sunday night's Grammy Awards, winning across a broad spectrum of categories:

College of Music Dean John W. Richmond says he was thrilled by the awards.

"I couldn't have been more excited about the achievements of our alumni," he says."It shows that the longstanding traditions of UNT musical excellence are continuing to grow."

The variety of categories represented ― from contemporary to classical and jazz, from instrumental to vocal ― demonstrates the comprehensiveness and breadth of UNT's College of Music.

And while the Grammy Awards are a personal achievement for the winners, being named a nominee also is prestigious.

"It's so thrilling for these artists," Richmond says. "The nominations alone put them in the very top echelons of their categories."