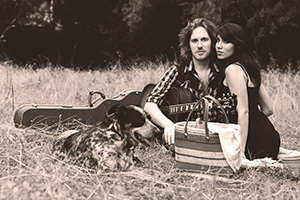 Chris Hawkes, along with his singing partner Miranda Dawn, wowed the panel of NBC's reality singing competition The Voice this season -- enough to make it to the second round of battles on coach Adam Levine's team and garner a top-selling single, "I've Just Seen a Face," on iTunes.

Hawkes, who studied art at UNT from 2000 to 2005, will be working with Dawn on their second Dawn and Hawkes album as the duo tours the country this year.

"To have input from such successful artists and absorb their positive feedback gave us a lot of confidence," he says.

Another Voice contestant, Madi Metcalf, part of the duo Alaska and Madi, attended several jazz workshops at UNT and said on the show that she plans to return as a student.

Watch videos of Dawn and Hawkes and Alaska and Madi. >>