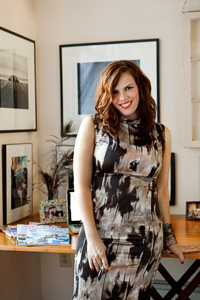 It’s a long way from Lubbock to Manhattan, but it’s a journey Ashley Womble (’04) knew she wanted to take after she began working in an internship for D Magazine while still a UNT student.

“I didn’t want to move back to Lubbock after graduation. I also didn’t want to live in a small town where I would probably start out as a newspaper reporter,” Womble says. “I could tell that, for me, magazines would be a better fit.”

Networking led to Womble interviewing with a human resources manager for Time Inc., then landing an editorial assistant job with This Old House magazine, one of the company’s smaller publications. Less than two years later, she became an associate editor for Harris Publications, where she worked on several magazines. She also began her own website, Homegurls, which she subtitled “A Modern’s Girl’s Guide to Playing House.”

“I like the level of creativity you can have online. You get to decide the best way to tell the story,” she says.