Jessie Pavelka, personal trainer on Lifetime's reality show DietTribe, says the years he spent as a UNT student represent an important turning point in his life. When he enrolled in 2001, he intended to play football and study business. But after 16 years devoted to the sport, he decided to hang up his cleats and focus on finding the right thing to fill the void football left behind.

He got certified as a trainer while he was a UNT student — initially as a temporary job—but it turned out that the right thing he'd been looking for was helping people get healthy. He moved to Los Angeles 14 months ago where he still works as a personal trainer, and quickly landed the job as fitness coach and healthy lifestyle expert on DietTribe.

The show follows five girl friends who each want to lose 30 pounds in 90 days. Pavelka and psychotherapist Stacy Kaiser help the women look honestly at their minds and bodies, then help them change their lifestyles and deal with the issues that caused them to gain weight. Read Jessie's tips to get in shape.

In a phone interview, Pavelka talked about how he got from Denton to Los Angeles, what UNT and Texas mean to him and what it takes to get fit and stay healthy. 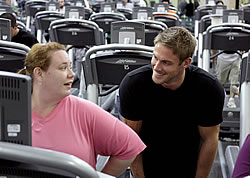 What UNT experiences helped prepare you for your career and the life you're living now?<
UNT was such a big part of my life. I played football when I first got there but I decided to quit. The experience of leaving behind something I'd done for so long was life changing. I was left with this space I had to fill. But it allowed me to put more effort into fitness and health and learning more about that. It was a turning point for me. And I met some of the best people I've ever known at North Texas.

What was your favorite memory about UNT and the Denton area?
I loved going to Lake Lewisville on the weekends when the sun was out. And I loved the winters there. When it would snow the campus was beautiful. Just being there was really cool. I wasn't always great about going to class. Sometimes I guess I let the outside capture my imagination a little too much.

Do you miss anything about Texas?
I miss the people a lot. I love Texans, they're just such great people. My best friends live out there. I miss my family the most, my mother and my father. My mom is still in Corpus Christi, my dad is in Denton.

What advice would you give to current UNT students?
The best advice I can give is the best advice that was given to me, and that is to be open to life. Don't live with a closed mind. Be open. Realize what's good and what's bad and make good choices, but don't think you have to do just one thing. Follow your dreams -- don't be afraid to dream and don't be afraid to go for it.

Are there any similarities between Los Angeles and Denton?
When I was at North Texas, the people were very open. LA is obviously a very open city, there are all different types of people, and everyone has something to offer. I kind of feel the two are very similar in that way. As far as the vibe and the energy, the two are not too far off.

How did you get from UNT to DietTribe?
I kind of knew what I wanted to do but finding the way to do it was the hard thing. I started doing shoots in LA for fitness magazines and things, but I was still in Texas and had to fly out to do them. Finally I decided on July 7, 2007, to move to LA to pursue a career, not only with fitness but also to see if I could do the acting and modeling thing. My agent, Gar Lester, called me one day and said, "Hey, go on this audition." They liked what I had to say, I put together a diet and exercise program, they loved it and we moved forward from there.

What do you think viewers will get from watching DietTribe?
Obviously, not all the viewers need to lose weight. But this is not just about losing weight. That's the cool thing about this show. They're trying to get into the girls' minds. This is about women who have issues who want to express them to America and see if anyone can relate. If you have an issue -- if you have an addiction problem, whatever it is -- try to plug your issue into the show and see if you can find some tools to help you with your life. Obviously, I want viewers to get the exercise and diet information, but most of all, I want them to get the mental aspect. Lots of people lose weight, just to put it right back on. You've got to fix your thinking and start doing what's right and putting your mind in the right place.

Catch up on the full DietTribe episodes that have aired so far.