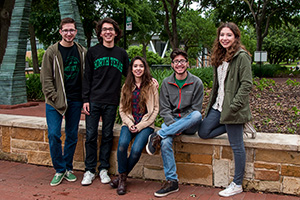 Freshman Enna Diaz was walking around the University of North Texas campus this year when it hit her that she was in college.

"Wow, this is actually happening," she says.

After years of preparation, Enna was cramming for exams, joining student organizations and living in a residence hall.

But Enna had something that most other freshmen didn't have -- her three brothers George, Johnny and Emilio and her sister Maria – all freshmen at UNT along with her. It's been a year since the Diaz quintuplets of Keller enrolled at UNT and, as for so many other freshmen, it's been a year of changes.

"They're totally different people now," says their father, Jorge Diaz. "They're developing their own personalities even though they're still living together. They've grown. They're more mature, more responsible."

Like most students, the quints have faced more challenging classes compared to high school and learned more about their majors.

"There are a lot more expectations, a lot more responsibility," says George, a business major. "It's on you. You can't blame anyone else."

Enna, who wants to be a doctor, had a tough load as a biology major.

"I knew it was going to be hard," Enna says. " And it was. I learned a lot, which made me more passionate about biology. It makes me want to go to medical school even more."

She found her own study method by reading her class notes three times. She also joined Alpha Epsilon Delta, a club for pre-health students that brings in speakers from various medical professions.

And Maria found reaffirmation in her chosen art major. She especially enjoyed her drawing class.

"They really teach you how to look at objects differently so you can draw them," she says. "I feel I can express myself with this art."

Johnny, a marketing major, says he learned to hone his time management skills.

Living in a town of young adults

Not only did they learn to be responsible for their studies, but the quints also had to begin handling their own chores.

"We fold our own laundry now, if we remember to do our laundry," George says. "If dining halls are closed at midnight, you just have to drive out to get food."

"You have to depend on yourself," Johnny says.

Since they have different schedules, the siblings take time to visit each other in their dorm rooms to study or talk. They often watch movies together and cook spaghetti, fajitas or tacos in the kitchenette. They eat lunch together in the dining halls and hang out at the Pohl Recreation Center.

"The good thing about living with my brothers is that we've practiced living together for 18 years," Johnny says.

Johnny played sports with his residence hall, and he and his brothers enjoyed skateboarding. He and George joined the Talons, the group that promotes school spirit by attending football and volleyball games and building the bonfire at Homecoming.

"A lot of people recruited me and my brother," George says. "It was an easy place to make friends, and they say you make your closest friends at college."

"College is like a town of young adults living together," Enna says.

Through their first-year college experiences, the quints were able to carve out different identities beyond what they had done in high school.

They visit their parents and their 15-year-old brother, Sebastian, in Keller every weekend. George, Emilio and Enna also have jobs.

Their father says he and the quintuplets' mother, Enna, always knew the strengths and weaknesses of each child.

"The time flies very fast and we're still expecting all of them to graduate at the same time," their father says. "Believe me, they have different personalities and they learn at different speeds. It's always been like that."

The brothers will likely room together next year, with another friend from Keller joining the sisters.

"It's a good experience to go to school with your siblings because you always have someone there," Enna says.

After all, they all are working toward their next goal in life.

"Getting closer toward a career -- that's pretty exciting," George says.