Q: Who is the Most Straightforward Host on TV Today? 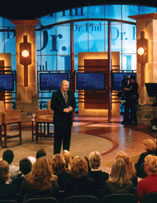 As the only graduate of "Oprah University," Phil McGraw ('76 M.A., '79 Ph.D.) has taken daytime television by storm -- with only his benefactor ranking ahead of him in the ratings since Dr. Phil the television show debuted last September.

The tough-talkin' Texan, known for his pull-no-punches summations of people's lives and problems, first started dishing out his advice on weekly appearances with Oprah after he helped her defeat a slander lawsuit filed by the Texas cattle industry in 1996. After some years of "sidekick" work, he cut the apron strings (kind of) and launched his own daily talk show, which is co-produced by Paramount Domestic Television in association with Harpo Productions and King World Productions.

But before he went to school with Oprah, Phillip C. McGraw came to North Texas for some schooling, earning his master's degree in experimental psychology and his doctorate in clinical psychology.

The North Texan caught up with Dr. Phil during a day of shooting at the Paramount Studios in Hollywood to reminisce about his days in Denton. As expected, the crown prince of talk TV had a lot to say. The following are excerpts from that interview.

Q: The professors at UNT who remember you say that in college you were always driven. Would you agree that at that age you were very driven, and are you still that way today?

A: I don't know what driven means, but whenever I'm involved in something, I always try to apply myself and do a good job. It's like here on the show -- you can't mail this in. This is a very serious endeavor and I take it seriously.

Read more about our visit to the set of Dr. Phil

When I went to North Texas I wanted to get a really top-drawer education. So when we would get a walk in a class, everybody'd go, "Oh yeah, a walk!" But that wasn't my attitude. My attitude was, "You know what, I came here to get information -- if I hadn't wanted to get the information, I'd have stayed home

So, yes, I'm pretty passionate about things I do, and particularly at this age, because I don't have to do the things I don't want to, and I've got more things that I do want to do than I can do.

Q: At North Texas you studied with G. Frank Lawlis, who is now an adviser to the show, so I assume you value what he taught you and still welcome his opinions?

I went to him and said, "I want you to be my major professor," and we talked about it and he said, "You know, I'm not the easiest guy in the world to study under, but if you want to do it we'll do it

Q: Beyond the academics, what do you remember about North Texas?

A: Denton in general, and North Texas in particular, are among my wife Robin's and my fondest memories.

We loved everywhere we lived -- loved all the little restaurants. Really, we just loved the culture there. And North Texas is such a music giant and we love music, so we really partook of all those opportunities.

We hardly ever missed a basketball game. That was an era when they were really doing well and had just built a new coliseum and, boy, we were there every single game. I played tennis there on the university courts with other students and faculty.

So, we really immersed ourselves in the university life. Our friends were at the university for the most part, but we also made friends in the community itself who were then, and still are today, good friends, and we get back there fairly often. We go up to basketball games sometimes. We used to come up and eat at the Texas Pickup. Now that it's gone I guess there'll be no more redneck mothers or chili fries.

Q: What advice would you give to a student graduating from North Texas now?

I've always had a philosophy -- since the day I walked out that door -- to market my education in a non-traditional way. I didn't want to be a face in the crowd. I didn't want to be just another psychologist 'cause I knew there were a lot of good ones coming out of there and a lot of other places.

So, I'd tell people to really think outside the mainstream application about what they're doing because you can't go through that university and not come out with a solid core education in your field. They're too good at what they do there; it's not a cattle call there like at some of the gigantic universities.

Q: You spend a lot of time talking about success and the bottom line in your books and with your guests. For you, what is the bottom-line definition of success?

A: That's a broad question. Success means different things in different parts of my life, but overall if I have to define ultimately what success means -- the bottom line -- then for me it's if the family is healthy and happy. You know, if Robin is thriving and the boys are humming along, then everything else pales in comparison and I feel like I've succeeded at the most important thing.