Growing partnership between UNT and UAEM 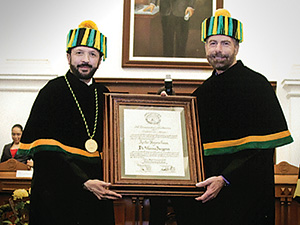 Located in Toluca, 45 miles west of Mexico City, the Universidad Autónoma del Estado de México is one of the largest public universities in Mexico, enrolling 49,000 students.

With the help of Provost Warren Burggren, then dean of UNT's College of Arts and Sciences, a formal agreement allowing UNT and UAEM to work together on research was signed in 2002. His involvement, which includes conducting biological sciences research with UAEM faculty members as well as representing UNT as an administrator, contributed to his recent naming as Rector Honoris Causa, or Honorary President, by UAEM officials.

Highlights of the 10-year partnership between UNT and UAEM include formation of an academic liaison office at both universities to promote the exchange of students and scholars between UNT and UAEM. And the formation of the UAEM-UNT Research Seed Funding Program in 2010 has strengthened the partnership. To date, the program has provided 23 awards to faculty members and their students in areas ranging from engineering and technology to natural sciences, education and humanities.

More about the
UNT-UAEM partnership

Read a complete feature on the partnership

"The seed fund has established itself as one of the most successful connections between the two institutions," says Manuel Goel, director of the UAEM academic liaison office at UNT. "Researchers demonstrate through science and culture that it is possible to break language and distance barriers."