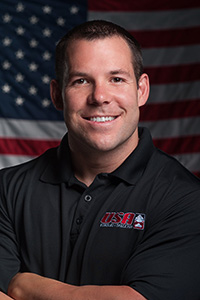 Mean Green Hall of Famer Johnny Quinn ('06) may not have won a medal at the Winter Olympics, but he did win the Internet during the two-week event.

Quinn, who was part of the four-man bobsledding team, said he was grateful to be there: "It has been an unbelievable experience to represent the USA @ the Olympics!"

Quinn became a viral sensation during the Olympic games, held in Sochi, Russia. In his first days at the Olympic Village, he found himself trapped in a bathroom and tweeted a picture of the door he rammed through to get out.

He even received Tweets of support from actor William Shatner and his former Green Bay Packers teammate, quarterback Aaron Rodgers.

Fans from around the world later tweeted pictures of themselves "Quinning" through various obstacles in their lives, prompting the hashtag #quinning.

Quinn also was eager to show his Mean Green pride -- such as doing the Eagle Claw during the Opening Ceremony. UNT returned the love with students posing in front of a door that had been Quinned.

Despite the loss, the Olympic experience represented a lifelong desire to compete athletically for the Texan, who had never pushed a sled in his life.

Quinn won glory as a high school and Mean Green football receiver, only to be cut three times from three different professional football teams and forced to retire due to injuries. In 2010, his agent suggested he try bobsledding.

"I was pretty fired up when I found out I was on the Olympic Team," says Quinn, who graduated with a degree in criminal justice. "I'm pumped because it's been four years of bobsledding. It's been a humbling athletic career. At 30, what a reward."

From football to bobsledding

He credits his time in Mean Green athletics for helping him prepare for the Olympics spot. As a member of the track team, he competed in the 100-meter and 200-meter dashes. And Quinn racked up records as a receiver for the football team -- becoming the all-time leading receiver in UNT's history -- and was inducted into the UNT Athletic Hall of Fame in 2011.

Quinn was a wide receiver for the Buffalo Bills and the Packers, as well as in the Canadian Football League.

"When I turned pro, my career did not turn out as I anticipated," he says.

He had to retire in 2010 due to a knee injury. He had recently co-founded a website to help high school athletes market themselves to colleges, when his agent made the suggestion about bobsledding.

The sport -- with two- or four-person teams steering a sled down an ice-covered, snake-like track -- often looks to football players with track and field experience to compete. Former football player and track star Herschel Walker participated in the bobsled in 1992, and former track stars Lolo Jones and Lauryn Williams competed  in this year's Olympic women's bobsledding team.

Quinn sent a video exhibiting his speed to two bobsledders, and that led to an invitation to participate in team trials in Lake Placid, N.Y., in 2010.

He placed third and his new career was born. 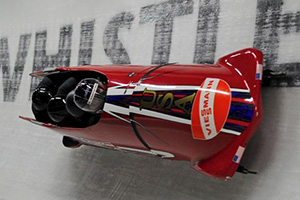 On the bobsled, Quinn travels as fast as 80 miles per hour in a carbon fiber frame. He compares it to a "really rough roller coaster at Six Flags -- and at any time, that roller coaster could break."

He has crashed eight times. But his football career got him ready for those high impact stops.

"When you play football, you have to play (even) when you're really banged up," he says.

While football was important to his bobsledding preparation, he says running track at UNT is what really prepared him the most.

In bobsledding competitions, the team may push for five minutes in a race, then take an hour break. It's similar to track meets, when he might have had an event in the morning, then a break and another event in the afternoon. The schedule taught him how to cool down mentally and physically.

"It's one of the best feelings in the world, just ripping down the hill," he says. "To be with three other guys representing a common goal, it's an unbelievable feeling of commitment and working together."

Read a profile of Quinn